Thanks to my buddy Siege for this tip…Looks like one of the hardest working bands in rock’n’roll is getting back together again for at least one night; although depending upon the results, who knows what happens next? If it’s anything like the 1999 reunion (which the article below omits, but trust me, it rocked), it might snap the earbuds out of the wandering masses and show them what they missed out on with all those years of shoegazing.

I saw the J. Geils Band so often in the 70s that I thought there was a law stating they had to be the middle act at any concert held in the War Memorial. They never disappointed, and Peter Wolf (one of the greatest front men, ever) made it his personal mission to get the last person in the last row as involved as the maniacs being crushed into the front of the stage. Mosh pit? How about dance floor? If they’re opening a new venue you know it’s wired, so hopefully there will be a live CD/DVD to slot alongside Full House, Blow Your Face Out and Showtime.

Long before they were MTV’s (temporary) darlings, they earned their stripes on stage.  Hell, they could even rock you in the morning! 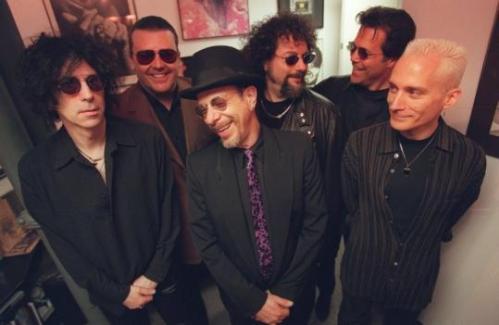 First they looked at the purse...

(The Boston Globe, January 29, 2009) It’s safe to say that tickets to see the J. Geils Band on stage at the House of Blues Feb. 19 will be hard to come by. The show, which has been rumored for a while but was only nailed down yesterday, should be a suitable spectacle to open Live Nation’s new Lansdowne Street concert venue. Since breaking up in 1985, J. Geils has not made a habit of re-forming. In 2006, Peter Wolf, Seth Justman, Jay Geils, Magic Dick, Danny Klein, and Stephen Jo Bladd jammed at Klein’s 60th birthday party at Scullers, playing a short set that included “Homework,” “Looking for a Love,” and “Give It to Me.” The band, minus Bladd, also killed at an ’05 fund-raiser for the Cam Neely Foundation, playing revved-up versions of “Ain’t Nothin’ but a House Party,” “Must of Got Lost,” “Centerfold,” and “Love Stinks.” But the band’s been silent since, with Wolf concentrating on his solo career. (The singer’s latest CD is done and due out this year.) Promoter Don Law says he wasn’t sure how the enigmatic frontman would respond, but figured it was worth asking. “We made them an offer, sure, but it’s more than money,” said Law, reached yesterday in LA. “These guys love this kind of venue and are tied into the history of the blues. This just makes perfect sense.” The show will be officially announced in a few days, and then tickets – all 2,400 of them – will go on sale. “We’re thrilled Peter took this seriously,” said Law. “We’ve tried before without success.”

Due to exceptional public demand, Mott The Hoople has added a third night at London’s Hammersmith Apollo on Thursday, October 1st. Tickets will not go on sale to the general public on the Ticketmaster site until Monday February 2nd.

But you Mott fans are not the “general public”, are you? Hint…get to www.mottthehoople.com ASAP.

Filed under Features and Interviews