Blast From The Past: Ben Vaughn 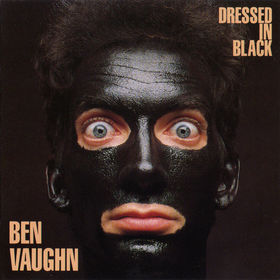 Let's see Ted Danson try and pull this off!

I first encountered Ben Vaughn when I went to see Marshall Crenshaw perform at a small college; Ben was the unannounced opening act who was the sacrificial lamb to a group of stoners impatient to hear the headliner. I must admit that I was not open-minded either; Vaughn was far from dynamic given the circumstances and the ambiance of a gymnasium certainly didn’t help. But right near the end of his half-hour set he pulled out “I’m Sorry (But So Is Brenda Lee)”, a song Crenshaw would soon cover himself. I knew from that moment I needed to follow this guy. (This thought was reinforced in spades years later when he recorded an album using the interior of a 1965 Rambler as his studio)

By the time Dressed In Black came out, Vaughn was respected enough to call upon the services of guests like John Hiatt, Alex Chilton, Peter Holsapple and Foster & Lloyd to join him in the studio. The result was probably his most accessible pop album, with takes on punk (“Cashier Girl”), rockabilly (“Growin’ A Beard”), commercial pop (“Big Drum Sound”), retro/surf (“Don’t Say You Don’t Wanna”) and even pop music tragedy through Neil Young flavored Americana (“Poor Jimmy Gordon”). The songwriting is clever; the performances note perfect.

Songs like “Words Can’t Say What I Want To Say” and  “The Man Who Has Everything” are as effervescent and accessible today as they were in 1990, and the brooding “Too Sensitive For This World” should be on many artists’ short lists of songs to cover. There’s really not a weak track on the record; in the days of auto-reverse cassette decks I would often let this ride two and three times in a row without regret.

He’s found great success as a producer – That 70s Show and Third Rock From The Sun feature his music – and his musical bandwidth continues to grow. But Dressed In Black remains not only my favorite Vaughn album, but also one of my favorite albums, period. If you do not own this record I can not recommend it more highly.

I’m now off to pay closer attention to his recent Vaughn Sings Vaughn series; if he’s re-recording his catalogue with a new band, I’m willing to listen.

Dressed In Black for a song