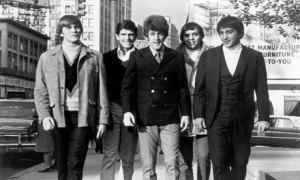 (Last week I got quite a few emails after the reprint of the 1910 Fruitgum Company essay, so here’s another from the same book where they originally ran. If you have any interest in that era of pop music I highly recommend you grab a copy of Bubblegum is the Naked Truth – a great read on the subject.)

Jeff Barry and Ellie Greenwich reportedly wrote the song in twenty minutes as a filler track that became the b-side of a failed single. The Spinners, then trolling the bus tour circuit, had it in their repertoire to help get a few people out on the dance floor. Tommy James, nee Jackson, grew up near the Michigan/ Indiana border and would often check out the Chicago and Detroit bands that came through the area. And when James needed another song to cut with his band the Shondells for a local DJ named Jack Douglas, he remembered the dumb riff that caught his ear.

Having only heard the song once, James didn’t even know the words, so he made some up and mumbled the others. It was just a riff after all. Douglas released the song on his Snap Records label, and after the usual brief local buzz, the record faded away.

That was until Mad Mike Metro, a Pittsburgh DJ, found the record in a bargain bin and started playing it repeatedly on his show, until it eventually soared all the way to number one in the area. By the time he was able to track James down, some local entrepreneur had already bootlegged it and sold thousands of copies. To capitalize on the success of the single, James quickly tried to reassemble the original band, who had all graduated from school and started to go their separate ways. In one of the classic bad career moves of rock ‘n’ roll, they all declined.

James then hooked up with a local Pittsburgh band called the Raconteurs, and after he and Douglas were able to license the original to Roulette Records what happened in Pittsburgh happened everywhere. “Hanky Panky” was a smash hit in 1966, hitting the top of the charts and selling over a million copies…

Read the rest of this essay at Bubblegum University

Buy Bubblegum is the Naked Truth.

Listen to some Tommy James on MySpace