My daughter picked up a copy of Network the other day; we had watched it together years ago. I’ve tried to resist imparting my list of music and film “classics” on my kids because people need to get their own socks knocked off and not have pre-conceived notions (at least any more than they will get from the media and/or their peers). But since she is pursuing a career in television production, I made an exception, and apparently an especially valid one since we now know just how prescient Paddy Chayefsky was. 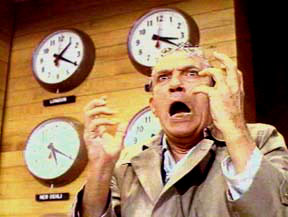 “I’m mad as hell and I’m not gonna take it anymore!”

I’m a big fan of curmudgeon comedy when it’s done well; few are better angst-ridden wailers than Marc Maron. His podcast series, WTF, is my favorite, and this recent bit with Eddie Pepitone just slayed me. Sure, it’s no Howard Beale going crazy, it’s just a hysterical rant from a comedian. But at the core it’s a rallying cry to see through the bullshit for what it is and realize that (in the words of Dean Vernon Wormer) “fat drunk and stupid is no way to go through life, son“!

“Why do I have to be concious for the horror?”

Subtly – or perhaps not so much – Maron and Pepitone are challenging their fellow comedians to step up their game and honor their craft by holding a mirror up to society and telling the truth. Because no one else is.

Laugh til it hurts, folks.