Blast From The Past: Best of British

When a musician is in demand as much as Ian “Mac” McLagan, you don’t seek him out as much as you find yourself encountering him at every turn. While viewing the DVD from the recent James McMurtry release, there he was at stage left manning the keyboard and rocking the house in an Amsterdam club. Not a day later while channel-surfing I came across Hal Ashby‘s 1983 film Let’s Spend The Night Together, the documentary capturing the Rolling Stones 1981 tour. Sure enough, there was Mac again, pounding the piano with the same energy and skill he continues to bless us with today.

In 35 years, McLagan has seen it all—lunatic egos, shape-shifting musical styles, more money than one could count and eras where you couldn’t give a great song away. Yet by all accounts, his survival is as attributable to his amiable nature as it is to his stellar chops. He’s the kind of chap you could imagine sitting at the pub with on a rainy afternoon, pints in hand, sharing a laugh and a tale.

A decade after writing those words, I got the chance to do just that, twice. Mac is a charming and amiable fellow without a wisp of ego, and having a pint or two while listening to his stories was as much fun as I imagined it would be. And telling him a joke that caused him to double over in laughter is a memory that will forever bring a smile to my face.

So with that serendipitous chain of events in mind, I pulled out my copy of Best of British and gave it a spin this morning. I also pulled up that old review…

Ian McLagan’s third solo record has been a long time coming—almost 20 years, to be exact. His previous platters, Troublemaker (1979) and Bump In The Night (1981), are a mixture of rock, boogie-woogie and bluesy soul. I’m happy to say that Best Of British picks up right where he left off, and with timeless music like his, the dates don’t mean a damned thing.

Read the full Best of British review from PopMatters. 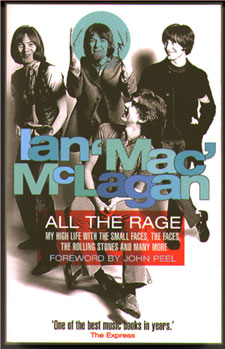 Tagged as All The Rage, Best of British, Blast From The Past, Bump Band, Bump In The Night, Hal Ashby, Ian McLagan, James McMurtry, Let's Spend The Night Together, Music, PopMatters, Reviews, Rolling Stones, Troublemaker