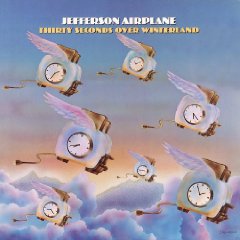 Jefferson Airplane was an intriguing band, capable of dynamic music, political boldness and spectacular performances, thanks to a combination of members who both illuminated each other’s strengths and compensated for each other’s gaps. Paul Kantner’s songs  could be calls to arms or mythic space oddities, but either way the fluid bass playing of Jack Casady and Jorma Kaukonen’s ethereal guitar added another dimension to his vision. There were usually multiple musical odysseys taking place within the same song, and when they were on, they were on.

Although not the original lead singer, Grace Slick was the point person for the most popular edition of the group. Beautiful and powerful, she was mesmerizing to watch and a siren on record, not to mention incredibly alluring to a young boy coming of age. San Francisco was exploding and I was on the wrong coastline, but I could start to imagine to what it was like anytime I heard her voice.

(I will always remember approaching the department store record counter and telling the clerk I want “Somebody To Love“. The girl leaned over the counter and looked me straight in the eye. “Me too“, she cooed. As she laughed and walked away to get the record for me, I tried to close my mouth, which had been left hanging open to match the deer-in-the-headlights look in my eyes. Someday I would have ten snappy comebacks for that flirtatious taunt, but that day I was pre-teen toast.)

Soon enough, the 60’s would stumble to a yang and yin conclusion with Woodstock and Altamont, two large festivals where the Airplane would make an appearance. The latter was a disaster of epic proportions (and a subject for another time) but Woodstock was magnificent. A series of albums called The Woodstock Experience have been released pairing an artist’s studio album with their live – and often unreleased – sets from the Festival. For Jefferson Airplane fans, this is a godsend and an example of the band at the height of its powers.

Unfortunately, just a few years later, it would all fall apart. Anyone who doubted the unraveling of the band or the total abandonment of their principles need only listen once to Thirty Seconds Over Winterland.

If you want to know what was going on with Jefferson Airplane when they took the stage for their final concert in 1972, consider the cover art that was used for this live document. Seven toasters, unplugged, flying in formation despite displaying clocks with different times. Or, if you will, seven burnt-out musicians doing their best to keep up appearances despite having completely separate agendas. This band had once—along with the Grateful Dead—spearheaded the psychedelic rock movement and the San Francisco music scene with dynamic live performances and a catalogue of material that was both populist and intricate. Now there were basically three factions under one roof vying for control.

Read the full review at PopMatters.