Under The Radar: Cartoon Factory 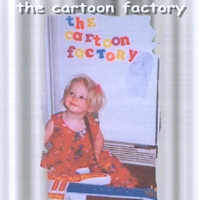 So many pop bands, so little time…

Ten years ago I came across a Greenville, South Carolina band called The Cartoon Factory on a late night surfing expedition; I was attracted to their energy and knack for a good powerpop hook. I thought their debut album was pretty good, and although it doesn’t appear they they ever issued a follow-up album (a 2002 release featured songs from an earlier configuration of the band under a different name), they’re still around and playing gigs, although Chuck Chapman seems to be the only original member still standing.

Powerpop is a broad term, so what do they sound like? Their website has some free downloads of pop covers like “Ah Leah”, “I’m a Believer” and “(I Want To) Rock and Roll All Night” as well as handful of great originals written in that same vein. Good harmonies, pop crunch; I’d say their self-appended comparison to Fountains of Wayne and Weezer is a decent starting point, as are the references I make below. If those names put a smile on your face, give these guys a listen.

My original review ran in Cosmik Debris in 2000…

Although the name might connote animated characters (or Jim Carrey’s short-lived sitcom debut), this quartet is a high-energy power-pop band that sets its sights on harmony and melody. You can’t be taking things too seriously when you have a track called “Monkey Girl” lead off your record. Factor in a band that has two Bay City Rollers fans paired up with two guys leaning more towards classic rock, and the combinations can get pretty interesting. For example, the melody of “Tongue Tied” sounds like The Cars taking a stab at Joe Jackson‘s “Is She Really Going Out With Him?.”

“Deaf Dumb And Blind” starts out like Eric Carmen‘s “Hey Deanie” before sliding into the infectious chorus. Only the closer “I Live For You” falls flat here, a disappointing arena thud-rock entry. The band is tight – David Swift‘s guitar and Louis Sijon‘s power drumming are solid, and the harmonies are spot on. Bassist Chip Anderson and guitarist/vocalist Chuck Chapman (the aforementioned Rollers fans) are also fans of the arena-sized power pop of Cheap Trick and KISS.

However, the production of the self-titled disc muzzles the bombast and goes for a crisp and clear sound; power chords are there, but glass isn’t shattering. “Hopeless” is a very catchy song that opens with a classic guitar riff that deserves to shake the house. But I’d rather have catchy songs than catchy production any day – I’ll bet that “Without You” and “Whirlwind” rock the house live. Keep an eye on these guys.