At The Movies: First Take 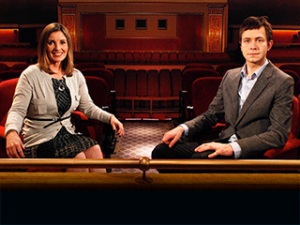 And so it begins, again…

The latest incarnation of the classic film review show is called Roger Ebert Presents: At The Movies, and the first episode hit the airwaves tonight, back on PBS stations where it belongs. The format is largely the same – two critics discussing films – although they have added some additional resources focusing on issues like classic cinema and film as social impact. And yes, those seats are once again in the balcony.

The critics are Christy Lemire (from the Associated Press) and Ignatiy Vishnevetsky (Chicago Reader, blogger for Mubi.com). Skewing even younger than the roundly trounced Two Bens model, the rapport between the two seems comfortable, although time will always tell in that regard.

I immediately liked Lemire, who looks like a cross between Natalie Portman and Meredith Viera. She’s well-spoken, makes and defends her points well, and looks comfortable in the lead role. And I’ll play both sides of the gender coin by saying that it’s good to finally see a woman as a regular on this show, and she is as attractive as she is smart. I’m not yet sold on Iggy; he tends to tangent into a review of a different film in an effort to validate his points on the one he’s reviewing, and he sometimes doesn’t find his way back to close the loop.

They’re off to a funny start – he likes everything, she didn’t like anything.

The one side featurette was interesting, as Kim Morgan was shot in a hazy black-and-white motif discussing The Third Man. Her analysis touched on the famous score, the use of angles, lights and shadows, and (of course) Orson Welles and one of the most famous movie entrances in film history. Morgan’s review was probably the highlight of the show, and if the idea is having her discuss a classic film every episode, well…thumbs up from me.

Lem made an odd comment afterwards (“she would not steer us wrong“) which made me wonder how an AP critic could have gone this long without having seen the film, but it was probably bad phrasing. And Welles made another appearance of sorts, as someone imitating his voice narrated a video that gave viewers a peek behind the scenes to meet “the new guys”, as it were.

Speaking of famous voices, much has been made about the part of the show where Roger will join in using a specific computer program that “speaks” hs voice as he types. In the course of his long career, Ebert has probably used every viable word in he English language, so inflection aside, this looked interesting. A few months ago a Youtube clip showed this process, but the heavily digitized voice sounded like Stephen Hawking; an electronic monotone just like you’ve heard from every talking computer in sci-fi history. I figured they were keeping the real thing under wraps for the show’s debut.

When the big moment arrived and Roger started to “speak”, I was horrified – “he sounds like Schwarzenegger!” I exclaimed. Thankfully the next words I heard were “this is Werner Herzog reading Roger’s words”. I don’t know if this idea is a placeholder while they continue to work on the Ebert voice application, or a creative decision to use guest narration, but I really hope it’s the latter. What better tribute for a great writer than to have a parade of actors, directors and other film giants bring them to life every week? 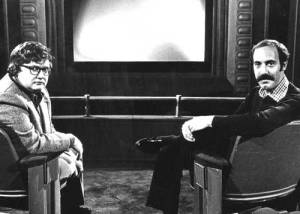 But idiosyncracies aside, I’m thrilled to have the program back on the air and look forward to watching it every Sunday. The closing credits included two nice touches – a clip of the original program’s intro featuring a very young Roger and Gene Siskel, and the production company’s title card with an animated Roger in an homage to Harry Lime’s famous entrance. And I will never tire of seeing this wonderful video that will open and/or close each episode.