Blast From The Past – Jack Green!

No, Forrest Gump didn’t say that. But it’s true! After writing about the Pretty Things I saw that they were now playing dates with other musicians filling in around Taylor and May. That started me thinking about bands who eventually have other players come through their ranks  in later years, from Bad Company to Foghat to Steppenwolf, so I decided to look up everyone who had been a Pretty Thing. And although I knew that Jack Green was in the band for a bit, I had totally forgotten it.

I didn’t discover Green from his tenure in the Pretties (even though I played Silk Torpedo and Savage Eye a lot) or as a member of T.Rex, either. My first conscious exposure to him came on an album that came out thirty years ago called Humanesque. Released at the cusp of the post-punk, corporate rock days, this fell into a group of refreshing albums with catchy songs, great guitar and a bit of a New Wave edge that this new channel called MTV would soon try to jump all over. But Jack Green wasn’t about posing and synthesisers and bullshit – he had crafted an album equal parts powerpop and Ziggy Stardust.

At the time I was both managing a small club and writing for an arts weekly called The National Rag, so I was fortunate enough to get pitched on bands from both angles, but his label never mentioned Jack Green. I was struck by the album cover – any veteran bin-browser has discovered many a favorite this way – and I think I remember reading a small clip comparing his voice to Bowie’s. I saw, I bought, and was conquered.

Green was a great guitar player but didn’t flash out just to show off; his solos (“Babe” is a great example) were tasty without wanking. He sounded as comfortable with pop-reggae (“Life on The Line”, “So Much”) as with more raspy rocking (the Bryan Adams-ish “I Call, No Answer”, featuring some Ritchie Blackmore axe work). “Thought It Was Easy” is a very pretty slow-tempo rocker that showcases his knack for a hook and his very appealing voice; ditto “Valentina” which features some nice tempo changes. And  “Murder” should have been as big a hit as Foreigner’s “Hot Blooded”.

“Factory Girl” starts out is a pretty straightforward pop rocker – fat chords, short sharp chorus – but morphs into a nice guitar workout. And the hypnotic closer, “This is Japan”, cleverly integrated Oriental arpeggios with a churning rock beat. (When I moved to Rochester a local band making good named Duke Jupiter covered it on their album; I’m pretty sure someone else had a minor hit with it as well). Frankly, there’s really not a duff track to be found here.

My favorite was the three-minute killer “Bout That Girl”, which did indeed sound like a Ziggy outtake. Great vocal, punchy guitar and a chorus that I found myself humming immediately. I played that song over and over; I thought it might be the greatest hook I had heard in years. The cassette player in my old Pontiac got quite a workout in those days, and anytime I had anyone in the car I would play it for them and blast the chorus…and to a person I’d get that nod of agreement: indeed, this is a hit record!

That was until the day I was giving Ed Hamell (yep, Hamell on Trial) a ride home. The first time through he stared intently at the tape deck (why do people stare at radios and tape players?) before breaking into a wicked grin. When the chorus came around the second time he sang loudly, and in perfect rhythm…the first line of the chorus from The Byrds‘ “Chestnut Mare”.

Damn. “Somebody should have told me about that girl“…”I’m gonna catch that horse if I can“…that was a perfect fit.

Reeling, I let buzzkill Ed out of the car, probably as amazed that he nailed the reference so easily as I was that I missed it in a hundred listens. No wonder that one line struck me so immediately – it had been in my brain for years! But lest you think I’m accusing Mr. Green of deliberately swiping a hook, I’m not. The rest of the chorus, let alone the rest of the entire songs, are as different as night and day. The Byrds never said anything, and I never heard anyone else but Ed make the connection. Just another happy accident in rock and roll.

But that anecdote is as fresh in my head as if it happened yesterday, and whenever I think of that song I think of Ed and that Pontiac and that time of my life. It’s just one more occasion where a song and a time and an experience are linked together and burned in my memory. And those are the things that will continue to put a smile on my face as long as I live.

Video: “This Is Japan“

Copies of this album are going for ridiculous prices on Amazon; I have no idea what the situation is regarding ownership of the masters or whether anyone even cares enough to try to re-release them again. Lord knows there can’t be a ton of money in that. But I’ve got a rack full of albums from that 3-4 year period surrounding 1980, and it’s a gold mine of greatness. Gary Myrick, The Sinceros, Phil Seymour, The Photos, The Fabulous Poodles, Pearl Harbor and The Explosions…trust me, it’s a long list of people who mostly had two albums before having the plug pulled.

I own both Humanesque and Reverse Logic; I never saw the other two or I would have snapped them up in a heartbeat. His later efforts provided a hit for Roger Daltrey and an association with John Mellencamp, and he’s enjoyed a successful artistic career in and out of music.

Some of the CBS artists have been lucky enough to have their work re-issued as 2-fers, giving a new generation an opportunity to discover albums that didn’t get their due. It would be really great if whatever conglomerate owns these RCA albums would do the same for him to remind the world how special these Jack Green albums are.

Don’t confuse him with this guy.

Under The Radar: The Pretty Things 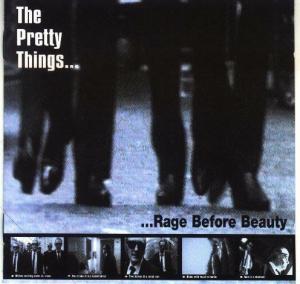 Well, to you, maybe, if you’re feigning surprise at the title. Hell, they were The Rolling Stones before the Stones were, and although they never got the press that Mick and the boys got in later life, they were still a significant part of the transition of rock’n’roll way back when. They were unmistakeably cool. They probably created the first concept album, even though Tommy by The Who is what most people will nominate when asked that question.

But even many of those who nod approvingly about Dick Taylor and Phil May and the boys from the 60s assume that it all ended a long time ago. So I’m writing today for those people.

To the amazement of many, in 1999 they came off the mat with a new album almost a quarter century past their zenith. Eight years later they released another (Balboa Island), but I prefer Rage Before Beauty. Here are my words from eleven years ago as they appeared in Consumable Online (including references to cloth-covered speakers and an amazement that men can rock in their fifties!)

Rage Before Beauty. And if you think that’s a great title, consider that the original was Fuck Oasis, and Fuck You!

Yessirree, these geezers haven’t lost one iota of vinegar over thirty five years, and now there’s a recorded document to prove it. Snapper Music has recently released the classic older titles by The Pretty Things along with this collection of material recorded during the mid and late nineties. The original band is as intact as it possibly can be in 1999, and that gives a whole new meaning to the phrase “boys to men” now, doesn’t it?

For those unfamiliar with the band, they were contemporaries of The Rolling Stones (guitarist Dick Taylor was an original Stone), but their behavior and attitude made the Stones look like decent lads. When your drummer is widely considered the inspiration for Keith Moon‘s loutish lifestyle, well…that’s saying a mouthful.

It’s also pretty widely accepted that their S.F.Sorrow was the first rock opera, although Tommy certainly got the accolades and the airplay. They were the first signing to Led Zeppelin‘s flagship label Swan Song, but snafus let Bad Company get theirs out first. Whatever! It seems that The Pretty Things were snakebitten from the start, so why not channel that aggression into your life as well as your music? And so they did.

Rage Before Beauty is a telegram from a shipload of survivors, serving notice that although they’re old, they’re not in the way. Shit, Phil May‘s voice has a rasp that only pain could season. On “Love Keeps Hanging On”, May’s autobiographical tale of a relationship that’s been battered over time, his heart almost bleeds through the speaker cloth. What starts like “Wild Horses” soon increases intensity and by the finish is a full blown Pink Floyd anthem, with David Gilmour providing the type of emotional guitar solo he has built a career upon. Listen to the intensity of “Not Givin’ In”, which dares to drape garage punk with acoustic guitars (!), and it’s hard to believe that this is a band of men in their fifties. Ditto the opening cut “Passion Of Love”, very uptempo (for the Pretties) and a challenge to bands half their age.

Guitarists Dick Taylor and Frank Holland simply shine throughout the record, but perhaps these two are great examples of less being more. “Everlasting Flame” recalls “19th Nervous Breakdown”; Skip Alan‘s drumming and the keyboard’s duel with the guitar leaving May no choice but to use the same cadence. And speaking of Bo Diddley, the tribute to their loon of a drummer, “Vivian Prince”, is another winner.

Making the record was reportedly as easy as passing a stone, though, and in spots it shows. Songs like “Blue Turns To Red” and “Going Downhill” (their single from 1989) sound like unfinished ideas when compared to some of the others already mentioned. And although they were probably a gas to record, three covers (“Eve Of Destruction”, “Mony Mony” and “Play With Fire”) are a large percentage to have when you’ve had so much time on your hands. “Fire” does have an interestingly seamy arrangement, and “Mony Mony” does feature Ronnie Spector, but they would have been better saved for live shows or buried as bonus cuts. I’d rather have seen the band add more rave ups or even songs like the frail, acoustic “Fly Away” instead, but I say that just to amuse myself. I know that the band would just tell me to piss off if I really suggested it to them.

Had the band not issued Rage Before Beauty at all, their legacy would have still been assured. They just wanted you to know that they’re not going out quietly, and they just might kick a few more asses before they do. By all means grab their earlier works,  especially S.F. Sorrow and Silk Torpedo, and then savor the great moments captured here, which far outweigh the ordinary ones.

The great old days are much like the new ones