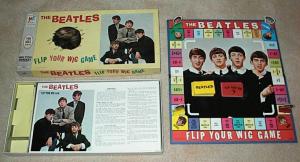 Of course, you know that, and if like me you were there for the seismic shift, you remember the Ed Sullivan Show, and the screaming girls and the absolute dominance of the pop charts. You remember the cheeky interviews and the Christmas Fan Club singles and even debating whether some Canadian musician was standing in Paul McCartney’s Beatle boots.

There were lunch boxes and posters and trading cards. There were even cartoons. And then there was Flip Your Wig.

I remember buying this for my neighbors Fran and Janet and probably even playing it once. But if you thought it was demoralizing to watch girls moon over Beatles picture sleeves while not giving you the time of day, imagine playing a board game with them where every roll of the dice involved kissing a cardboard cut-out of a Beatle. And you wonder why most guys were Stones fans.

But Doc, that’s old school shit my grandpa babbled about. I’m a ’77 punker and I hate The Beatles. I grew up on cool bands like The Clash. 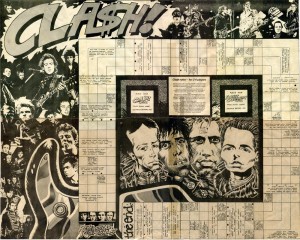 My buddy Angelo over at Power Pop Criminals went to great pains to scan and reassemble the free game that the rock weekly Sounds gave away. Angelo describes it as a Snakes and Ladders type game covering events in the band’s early career, complete with playing cards and cut-outs of the handsome quartet.

So click here to visit PPC, get your scissors, tape, glue (no sniffing!) and cardboard and have at it. It’s a White Riot!

I enjoy documentary films. I love The Beatles.

The documentary film All Together Now traces the development of the collaborative Love project from its inception through its 2006 debut. What began as a conversation between George Harrison and Cirque du Soleil founder Guy Laliberte expanded into a massive undertaking that required years of preparation and unprecedented artistic partnerships between Cirque, Apple Corps and the Mirage Hotel.

Harrison was a fan of the unique artistry of the Cirque du Soleil performances and envisioned a bold and original rebirth of the Beatles’ catalogue. His death in 2001 provided an additional sense of purpose, although representatives for all four Beatles would need to agree on concept and execution. Director Adrian Wills follows the timeline and inserts the viewers into the process by letting them observe activity and conversations between principals rather than rely on first-person narrative. It’s a wise choice for such voyeuristic subject matter.

The pulse of the documentary is the immense amount of challenges faced by everyone involved. For Cirque du Soleil, this presentation was much more of a musical stage show than their previous productions, as well as being the first time working without a live band. Not only would the synchronization between acrobatics and music have to be exact, but they would have to rely upon the engineers to loop the recorded music if there was an accident or a technical glitch. Several of the performers were stage actors or dancers working in a completely new environment, admittedly working on blind faith until the rehearsals were finally moved to the working stage in Las Vegas.

The theatre itself was a massive undertaking; besides the elaborate stage and rigging there needed to be impeccable sound to truly envelop and involve the audience. The final design incorporated over 6,300 speakers and construction ran over $100 million.

Naturally, one of the biggest decisions revolved around how to utilize the Beatles music in the show. There had been many Beatle-oriented projects ranging from tribute bands to stage shows like Beatlemania, but the creators wanted to create a new dynamic that would go far beyond merely playing a set of Beatles songs in period costumes. When the idea of deconstructing and reassembling recorded tracks came up, the call went out to George Martin. As Ringo said, “he knows where all the skeletons are buried”.

Read my full review at PopMatters.

All you need is...a plane ticket and cash.

Scarf this one up!

Well, not brand new. Solin recorded Energy Fair in late 2007, some copies were out in 2008, but the album release party was only a couple of months ago. Semantics – good music is good music, and Energy Fair is loaded with it.  The album cover doesn’t suggest a skiller pop craftsman, nor does the daunting title of the opening track “Which Way To Sanity”. But by track two, the jangly “Take it From The Top”, you’re ready to go the distance. And at nineteen tracks, you have miles to go!

Solin has a solid, appealing voice and doesn’t really sound like John Lennon incarnate, although that might be the most frequent namedrop I’ve heard, probably because he portrayed Lennon in an Off-Broadway Beatlemania show. (I’ve heard others suggest Parthenon Huxley and even a more centered David Bowie, and I can’t against argue either.) If anything, the album is more often channeling George Martin-isms, although you’d expect that kind of nick from someone who is a producer himself.

“Strawberry Wine” really bleeds the influences, featuring “Penny Lane” trumpet, Ringo drum fills and the slow march of voice over piano that Lennon would use on his more pensive numbers. However, the result is anything but a Beatles cop; in fact it is more closely comparable to the midtempo Memphis pop of Van Duren (even more eeriely reminiscent on the gorgeous “Diamond Gold” and “Doesn’t Have To Be With You”). That’s a big compliment.

What I found remarkable about Energy Fair was the ability to keep up the pace for nineteen songs without flagging, especially considering that the bulk of the tunes exceed the four minute mark. While the slower tempo songs allow you to appreciate his lyrics and phrasing, the jaunty tracks like “No Connection” (a favorite), “Adrienne” and “Robin” are just as appealing. Songs are catchy, but not dumb-riff simple; there’s a lot of meat on these bones.

Nothing really rocks on this album with the exception of the 60s psych “Cuz I’m Yours” and “Streets of Westville”, the latter a dark, brooding hybrid of Jim Morrison and Neil Young’s Crazy Horse. Still, while it might sound fine blasting out your car window you’re not going to get anyone dancing or flashing you the rock horns. But neither is it an album that demands quiet introspection, as if the fragilty of the experience would be violated by sharing it outside your personal space. Energy Fair is diverse and vibrant enough to be appealing under any circumstance. If I heard this wafting across the fence I’d be more inclined to hop across and meet that new neighbor.

Solin website with links to purchase from Not Lame and Kool Kat.

Listen to clips at CDBaby.