Blast From The Past – Bobby Gaylor 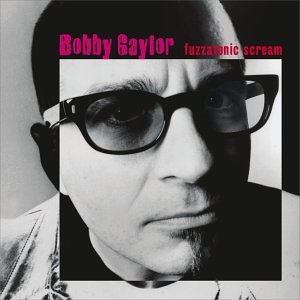 I was reading emails from friends about the recent Alejandro Escovedo concert with Hamell On Trial as an opener – a perfect pairing that I sadly missed – and the reviewer mentioned how he had met Escovedo in Austin while both were clerks ar Waterloo Records. Hamell, a native of upstate New York, eventually migrated there when starting his solo career, a decision that led to his explosion onto the alternative scene and his initial major label deal.

Ed Hamell is a literate and wordy guy, so I found myself referring to him when I’d come across similar artists, or at least those who would issue combinations of spoken word and music. And while dwelling on that memory, I remembered Bobby Gaylor‘s song “Suicide“, which caused quite a stir upon its release…although many people misinterpreted the point of the song in their “Born In The USA” kinda way.

So thanks to my random and erratic brain synapses, here’s my ten-year old review of Gaylor’s Fuzzatonic Scream album, which originally ran in Consumable Online…

If you have had a radio on these past couple of months, you’ve probably heard “Suicide”, the arresting spoken-word track that has polarized the listening audience. No, it’s not a pro-suicide song, although it wouldn’t be the first time that dimwitted people have rallied against a song or poem without comprehending it. But it does cleverly begin with an off-the-cuff attitude that hooks your sick sense of humor, before spinning on a dime midway through to head towards its very anti-suicide coda — “Hey, you were born – finish what you started!” Whether it’s the overwhelming majority of people who are moved by the track or the 10% or so who are offended, the phone lights up whenever the track airs.

Bobby Gaylor’s phrasing and Boston accent will remind you of Denis Leary, although his comic story style owes more to performers like Ed Hamell and monologists like Eric Bogosian than any stand-up comic (well, this side of Chris Rush, anyway.) His skewed reality is not so different from ours, but few people have the ability to tell as colorful of a story while still remaining believable. If you have that one friend who can make any situation or story sound funny, or scary, or important, well, that’s Bobby Gaylor in a nutshell.

What is unusual is the musical accompaniment; one is more used to hearing laughter or silence rather than music.  Occasionally it works wonders;  “Suicide” plays like an alternative folk song, “Animals” would play well on The Discovery Channel, and “Tommy The Frog Killer” has a pulsing Euro-sound rolling underneath like an independent film. Which makes sense of course, since soundtrack composer and musician/engineer Marc Bonilla provide the “score” to Gaylor’s tales. Not all stories are funny – although “Hit A Guy With My Car” is morbidly hilarious – but they’re all compelling with or without the music. Masturbation, families, animals, violence, and the artlessness of smelt fishing all get a turn under his microscope.

“Suicide” will no doubt grab your attention, and may indeed change your life, but Gaylor is no one-trick pony. And for those who can’t handle the truth, yes, the radio-edit version of “Suicide” is included as well as the full-blown rant.