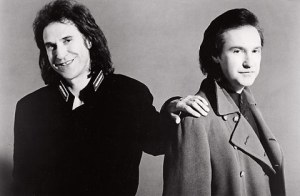 AP (LONDON) – After months of terse negotiations, former Oasis members and famous battling brothers Liam and Noel Gallagher have signed on to portray Ray and Dave Davies, respectively, in the upcoming film The Great Lost Kinks Movie. Initially slated for the project, the pair’s long history of bizarre behavior led producers to look elsewhere in the hope of finding other real-life brothers who could convincingly portray the love-hate relationship between the Kinks siblings.

A source close to the project stated that Chris and Rich Robinson of The Black Crowes had the right attitude but the wrong look, while two of The Isley Brothers were deemed “too old” and “not pasty enough”. Michael Caine showed up at the audition offering to play both parts, stunning the casting director with an official OBE document that requires him to “be cast in every film production scheduled during his lifetime”.

Other suggestions (The Righteous Brothers, The Krays) were dismissed because the subjects were either dead or not really brothers (or both), and long-shot hopefuls Wladimir and Vitali Klitschko disappointed producers by refusing to fight one another.

With the state of their old band in doubt, and new projects Beady Eye and High Flying Birds no more than third tier bands, the Gallaghers were wooed back to the project and signed on. “I think we’ll be bloody perfect“, offered Noel, “because like Dave, I have suffered second banana status in my own band thanks to an arse of a front-man“. And while Noel is not certain that brother Liam will capture the panache and depth of tortured genius Ray, “there’s a long line of people who would love to shoot that cunt in the leg“.

Why stop at the leg?