Let’s Hear It For The Girl

My daughter Eli attends Emerson College, a phenomenal place for anyone interested in entertainment, whether production or performance. Lots of famous alumni of course – among them Stephen Wright, Bill Burr, Gina Gershon, Jay Leno, Denis Leary, Henry Winkler and Norman Lear. Successful show creators, too – her freshman dorm was funded by Max Mutchnick (creator of Will and Grace) and last year ahe worked with Friends creator Kevin Bright  to create a sitcom from scratch. Doug Herzog, President of Comedy Central, is another graduate.

The list goes on and on…if I were a high school grad interested in a career in the arts I would crawl through broken glass while on fire just to apply. (Or at least ride a bike.) Of course, when I was looking at colleges, that area of Boston was known as the Combat Zone, rivaling the pre-Guiliani Times Square for opulent decadence. Today it’s the Theatre District, much hipper than the sanitized Disney-fication of the most famous intersection in Manhattan.

My enthusiasm is exactly the opposite for Lady Gaga – it’s the kind of processed dance pop that makes my skin crawl. But my Dad didn’t “get” The Beatles; likewise I’m not the target demo for the songs that she/he/it creates.

But even I have to give props for this amazing Emerson Lip Dub.

Most schools have an informative brochure or website to give potential students an idea of what it’s like to attend their university. I think the Admissions Department just trumped the competition – courtesy of the effort of over four hundred students. Kudos, Emersonians! 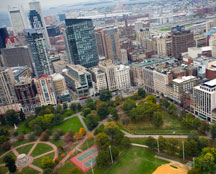