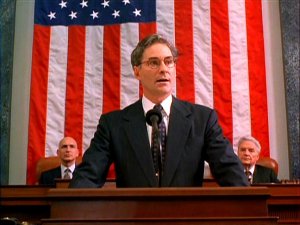 Ever flip channels and stop on a movie you’ve seen a few times, but you settle in to watch it anyway? Of course you have. And when it’s heavily does with commercials, and you’re thinking “I have that DVD” but you sit there anyway? Okay…maybe that’s just lazy…but that must be one good movie. Usually it’s a broad comedy I can quote line for line, like Caddyshack or Major League or Animal House. It usually isn’t a plot-driven movie.

But tonight that happened to me with Dave. Again.

The plot, simple but brilliant – a corrupt administration finds a look-alike to double for a critically ill President so they can continue their illegal agenda. Kevin Kline as the titular character is the head of a temp agency, a nice guy who puts others before him and a dead ringer for the incapacitated President. At first agreeable to follow orders, he soon sees both the diseased plans of the ambitious Chief Of Staff (Frank Langella, great as always) but also the opportunity to do something for the right reasons.

Director Ivan Reitman had stumbled badly after a winning trifecta (Meatballs/Stripes/Ghostbusters), but this film resurrected his credibility. The cast is uniformly brilliant, with Sigourney Weaver, Ving Rhames and Kevin Dunn providing excellent support. Don’t even get me started on the brilliance of Kline, surely one of the most underrated actors of his generation. Great cameo roles for Bonnie Hunt and Laura Linney. And a Charles Grodin sighting? That’s bonus points, son. And kudos to Gary Ross, who also scripted other movies with big heart like Big and Pleasantville.

The only sad thing about Dave is that it makes me wish our leaders had those same unselfish, uncorrupted qualities. Much like Dennis Haysbert’s performance as President Palmer on the early episodes of 24, I came away wishing that just this once, fantasy could be reality. But they don’t, and it’s not.

But there I go again, talking about the deeper meaning of a film that is ultimately a redemption story about second chances and good triumphing over evil. Sometimes, even in the guise of light comedy, deeper points can be made. And when flipping channels on a Monday night, sometimes a well made movie can be appreciated for being  just that. 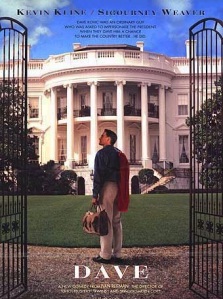