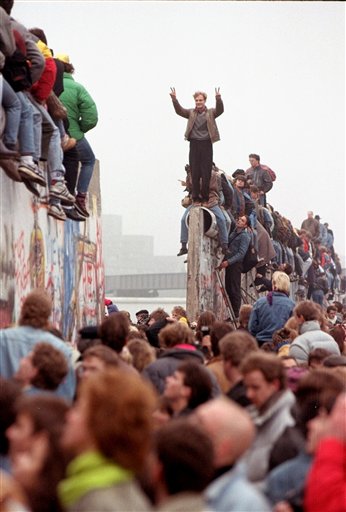 The futher away we get from this, the more it will be taken for granted. As one of the generation who had daily air-raid drills I can attest to the weirdness that was the Cold War (Why we were any safer in the fetal position under our school desks, I dunno, but whatever…).

To witness this twenty years ago was astounding.

So maybe you get that Pink Floyd album out today. Maybe you watch The Third Man. Maybe you go really out there and blast Hedwig and the Angry Inch out your windows (highly recommended, by the way). Or maybe you simply call your Dad or Grandpa and thank him for doing the same thing that our brave men and women do today – putting their lives on the line. Celebrate liberation…in whatever form you can savor it.

But if you think we learn from history, think again.

(This isn’t about political party lines – it’s about humanity. And tomorrow’s anniversary will be as well, albeit in a totally different way.)