I bow in your honor

I love, love, love tribute albums. Some are so inventive they occasionally exceed the original. Some are so poorly regimented that they’re fun like an Ed Wood movie is fun. You just have to admire a group of artists taking the plunge, whether it’s a label trying to promote their artist roster or a heartfely bow to some grand master.

I think the pinnacle for me is still eggBert’s Sing Hollies In Reverse, which featured a stunning asssemblage of pop stars, great song selections and some unbelieveable takes on the Hollies canon. Then they wrapped it up in a beautiful package with a well-written and informative booklet. Handled with care. The late great Greg Dwinell is no longer with us, but that album is one of his shining legacies.

But I know most people aren’t like me – tribute albums make as much sense as ducking an artist’s concert to see a cover band. And the funny thing is, I abhor most cover bands. Maybe I like tributes more because of the one-song-per-artist rule, or maybe it’s that I don’t have to watch them…I can just listen. And when the collection creatively juggles so many styles – folk, rock, dixieland, punk, r&b, glam, powerpop – so much the better.

Here are ten tribute albums that might have slipped by you. Click on the links below to listen to sound clips – you’ll be surprised how great some of the cuts are, not to mention some of the famous artists participating on even the tiniest label efforts!

Resurrection of The Warlock  (T. Rex)

Turban Renewal  (Sam the Sham and the Pharaohs)

We Will Fall  (Iggy Pop)

Frankly a Capella  (Frank Zappa / The Mothers of Invention) 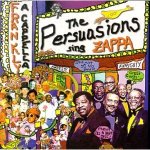