Tag Archives: Have You Seen Me Lately?

Hard to believe that it’s eighteen years since Sam Kinsion was killed.

Like many, my first exposure to Sam’s mania was on the Young Comedian’s Special on HBO, hosted by Rodney Dangerfield. He was onstage for six minutes – six – and I’ll wager that anyone who watched that show that evening was on the phone by morning, calling a friend and saying “Holy shit…you have to see this guy!”.

Sam on the 1984 Young Comedian’s Special

Dangerfield proved to be a friend and mentor to Sam. Unlike some comedians, Rodney wasn’t afraid of competition from other comics, and Sam was incandescent from his first appearance. Rodney created the role of Professor Turgeson in his new movie Back To School just to give him a cameo, which Sam turned into one of the film’s best moments.

Sam’s routines on television were legendary; David Letterman‘s classic introduction for him was “Brace yourselves. I’m not kidding. Please welcome Sam Kinison.”

But you had to see him live. I was fortunate enough to see Sam three times; the first was in a tiny basement club with black walls and ceiling and a tiny stage with a couple of lights. Didn’t matter – Sam brought his own flame. He hit the stage with more energy and power than many of the rock bands that played there; his incendiary performance singed the hair off every head in the crowd. It was one of the most intense experiences of my life; I laughed my ass off but felt like I was pinned to the chair by a gale force wind the entire time. 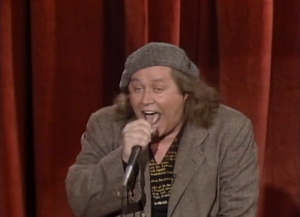 Thankfully there are a few recorded documents to preserve Sam’s greatness. He issued three albums (Louder Than Hell, Have You Seen Me Lately?, Leader of the Banned); a fourth (Live From Hell) was released posthumously. (There are also some rarities available at the official website.) There are several DVDs available containing performance footage from Sam’s shows;  Wild Child collects a few of them together at one low price.

Brother Sam, a reminiscence by Sam’s brother Bill, is an excellent read. While the film based upon the book (with Dan Fogler as Sam) has not yet surfaced, the latest word is that HBO has it scheduled for 2012, the twentieth anniversary of his death. (A similarly titled documentary was released in 2005 featuring Bill and Rodney Dangerfield introducing a series of clips from Sam’s concerts.)

When mercurial artists die young, sometimes their short careers become over-rated because all we have to judge them by are a few brief moments that we extrapolate. History tells us that no one stays on top forever; Jimi Hendrix would have made a disappointing album at some point and James Dean would have starred in a clunker. Sam died young but we already got to see the ups and downs; he had streaks of absolute brilliance and periods of wasted excess. We saw him get off the mat and stand up again.

But what Sam always had was an insatiable need to connect, and had he lived I’m certain he would have been one of our greatest social critics, for he had no sacred cows. We lost Sam and Bill Hicks within two years of each other, two fearless comics who threw the truth out there in very different ways, both sadly gone in their 30’s. But the legacy of Bill Hicks lives on, sparked again with the release of American this year. Hopefully Sam’s movie will help perpetuate his memory and introduce him to a whole generation of people who have grown up without him. R.I.P., Sam.

Craig Gass doesn’t look like Sam, but close your eyes and listen.