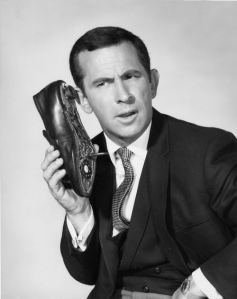 Get Smart was one of the funniest television shows of its time, combining puns and double-entendres with great sight gags. Of course, they had a ripe playing field to run around on. Spy movies were big at the time – from the apex of the James Bond films to the more serious (and better scripted) classics like The Ipcress File and The Spy Who Came In From The Cold.

Of course, with writers like Buck Henry and Mel Brooks, how could it not be funny? Catchphrases “Would you believe?”, “Missed it by that much!” and “Sorry about that, Chief” became part of the lexicon. It’s no accident that Steve Carell played the Maxwell Smart role in the recent big screen adaptation; both comic actors have a knack for sarcasm and deadpan humor. By more or less playing it straight, their buffoonish characters are that much funnier.

Adams’ distinctive voice was also immediately recognizable as the lead character in a pair of well-known cartoon classics – Tennessee Tuxedo and Inspector Gadget. Not much acting there – each sounded exactly like Maxwell Smart hiding behind an animated costume, which made watching either of them a surreal experience for me.

But sometimes lightning in a bottle is just that. The Get Smart films Adams made were amusing but paled in comparison to the show, as did the Carell film (which had its moments but completely blew the tone). Adams and Barbara Feldon even tried to re-launch the series  thirty years after the initial program debuted (with Max as chief!) but it  floundered and died. Thankfully, the studios finally released the complete set of the original Get Smart episodes two years ago…it’s amazing how much of it holds up after forty-five years.

Get Smart on DVD