Under The Radar: South Filthy 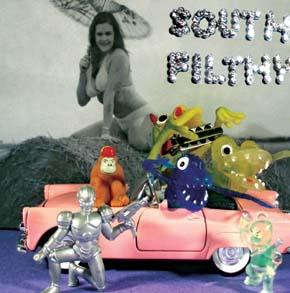 For this cover, no caption will do

Eugene Chadborne and Jack Yarber in the same space and time? Covers of Howlin’ Wolf, Ian Hunter, Warren Zevon and The Zeroes? Someone is reading my thoughts again. But what at first looks to be a raw, bluesy coalition scraping through swamp rock and jukebox leftovers quickly turns as fascinating and odd as the list of musicians. When most people hear “supergroup” they think Blind Faith or CSN or some other A-list combination of name artists. South Filthy is also a supergroup, but their ranks are filled with battle-tested, alcohol-soaked barrroom warriors from groups like Compuslive Gamblers and Tearjerkers along with the pen and sword of the uber-prolific Monsieur Jeffrey Evans.

Their 2006 album Crackin’ Up isn’t for everyone; might not even be for most. But liquor up and listen…

I’m not certain how much permanence there is in the Memphis-Texas coalition or just how far their tongues are stuck up their collective cheeks (the inebriated waltz of Tom T. Hall’s “I Like Beer” bats in the 3-hole here). But if you think of this as Karaoke Night gone horribly awry – with instruments – it’s like listening to a group of off-center musician pals taking the stage and daring each other to get weirder song by song. And yes, some of the tracks are as sloppy live as they are in studio. Last man standing, indeed.

Their take on “C’mon Let’s Monkey” sounds like the theme from “Happy Days” performed by a shopping cart of winos. “Flaming Star” is somewhere between fragile and sloppy, reminiscent of a late 80s Alex Chilton b-side (and wouldn’t he have fit right in here!). But the closer to the blues they get (Wolf’s “You Can’t Put Me Out”), the stronger and more sincere they sound. Yeah, there’s the occasional bad Bob Dylan impression and someone will come in a fraction behind the beat time to time, but so what? Lots of bright spots to enjoy, and the title track is a killer. Loosen up, willya?

All you need is a twenty and an alibi.