Taking It To Detroit, Part 2

Day Two of the manic weekend found me heading downtown to the Alley Deck in the Majestic Theatre complex to catch a set by one of my rock’n’roll heroes, Greg Cartwright. Having missed the Oblivians concert the night before (cloning is not one of my abilities) I knew I could not leave town without catching his solo set…even with a seven hour drive and two border crossings staring me down. I crawled in the door after midnight, but I’d do it all again in a heartbeat. 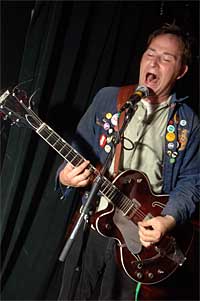 Greg apologized for being of raw throat and said he’d sing as long as he was able, then smiled and added “…but I will further fuck my voice up by smoking this cigarette“. The warning was all for naught;  he wound up playing two sets to an appreciative crowd of fans and fellow musicians… and I lost count at thirty-six songs.

Besdies a catalogue rich in great material, Cartwright had the crowd in stitches between songs – his story about Jack Oblivian selling his guitar to Jack White was classic. But he also paid genuine props to his peers, pointing out a friend who introduced him to an early Detroit single that’s now a live favorite, or how he learned how to better sing his own song “Bad Man” after hearing Rachael Nagy’s interpretation with The Detroit Cobras.

While there were some planned songs in his set, he also frequently took requests with the caveat that he might not remember all the words. Fumbles were rare, but when he hit the wall during “Two Thieves” he simply stopped and said “when I am beaten by my own brain, I will stand down“.  Then, laughing, he fired up the next tune. I’m not certain who had more fun, Greg or the audience. He’s an approachable guy who is the antithesis of the rock star persona, which is probably why so many other musicians are almost reverential when his name comes up in conversation.

The set list touched upon all his band associations like The Oblivians and The Compulsive Gamblers but mostly drew upon The Reigning Sound, with at least one new track (“Pocket Full of Broken Things“) from their upcoming album Love & Curses. Hard to pick highlights, but “Reptile Style”, “We Repel Each Other”, “Time Bomb High School” and “Stop And Think It Over” each lit the place up like a rocket.

The Reigning Sound is now headed for Europe, but will return Stateside by mid-August to prepare for a tour to support the new album. Do not miss the opportunity to see not only one of America’s finest bands, but a true icon of independent music. I’ll hopefully interview Greg later this summer as part of a feature article about the band.

Stop And Think It Over

We Repel Each Other