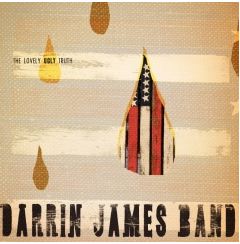 It’s tough to keep up with everything that comes down the pike, and I completely missed out on Thrones of Gold, the 2006 debut album from Darrin James. Had I read a quote like “As a songwriter, I have wanted to combine honest, dark lyrics with old school blues and a fusion of styles, to express the emotions and stories of tragic or flawed characters” I would have been all over that album in a heartbeat.

Fortunately this second effort did cross my desk. Having no expectations whatsoever, I let it unfold organically and found myself pleasantly surprised by the results. James spent a few years traveling the world playing and writing music, and this album is all over the map as well – but in a good way (kudos Matt Gill for solid recording in multiple studios). Blues, folk, rock, country; a nice blend of atmosphere for his characters and stories to take root in.

Critics have been pretty effusive, dropping comparisons to Robbie Robertson, Joe Henry, Lyle Lovett, Paul Westerberg, Tom Waits and Elvis Costello, among others. I drop a couple more names below.

James has a raw and expressive voice that can at first be jarring, but it does suit his material. His cadence in “I Was Wrong” makes him sound like Neil Diamond on a bender, while the voodoo blues of “Baby Don’t Bitch” might bring Captain Beefheart to mind. But when he settles in on something more pensive (“Shallow Grave”), he can float the timbre and wisdom of John Prine. It’s a nice chameleon act, so when he rolls into Dylan’s “Tonight I’ll Be Staying Here With You”, it fits hand in glove…

Read the full review at PopMatters.

Listen to clips at CD Baby