What can I say? He’s done it again.

As a followup to the prior Meet The Beatlesque, my pal Angelo at Power Pop Criminals has unleashed a new two-CD mixtape of Beatley tunes called Beatlesque Again. These are not Beatle covers, but rather a collection of songs that capture the essence and spirit of the Fab Four.

The list of artists should entice any fan of the genre, from more recognizable names like Robyn Hitchcock and Julian Lennon to successful indie pop stars like Ben Kweller, The Nines and Splitsville. Those yet to discover the wonders of Magic Christian, Kenny Howes, The Singles, The Greenberry Woods and The Redwalls will be bowled over.

There’s great music being made all the time, you just have to go find it. Angelo is one of your chief warriors in this effort, so click here and be thrilled by this fifty-five track collection. 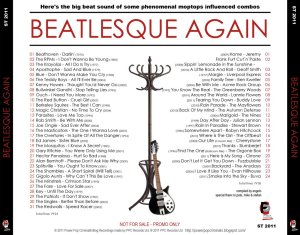