"And we would have gotten away with it too, if only you had never seen a Scooby Doo episode before."

One of the biggest problems with film and television is predictability; after watching thousands of hours of sitcoms, dramas and movies I can often see the next plot point coming along like it has beepers and a blinking light. It’s not so much that the plot is redundant – although it often is – but that the brevity of the material (especially commercial television) doesn’t allow for proper story arc and character development.

So often what happens is either the director/writer cheats, or the information is presented in such an obvious manner that you’re almost being told “hey, this is a clue!”. Of course people have the attention span of a gnat these days, so maybe I’m overworking the issue. But here are two key rules you can usually count on:

Few writers/directors would be crass enough to have the killer or key plot fact come sailing in out of left field at the eleventh hour, that’s just not fair. But a well-played twist requires what I’d call  sleight-of-mind…laying everything out there but being clever enough to not point at it with a floodlight.

An example of a well-presented twist is The Sixth Sense. (SPOILER ALERT…) At the end of the movie, when it was revealed that a key character was dead, I immediately recalled a scene where he was at dinner with his wife, had a conversation and even touched hands. But when I replayed the scene, I noticed that they in fact did not touch – their hands passed within a second of each other – and there was no eye contact. And then there was the revelation about the use of the color red. Then finally, the most obvious clue of all – “I see dead people“. Well played, M. Night Shyamalan – it was all right there in front of me and I missed it. Too bad you have been unable to hit the mark since then.

So for this Friday’s exercise, ten recommended movies that I think did the job well. Some will be very familiar, a couple are stone cold classics, but I’ve avoided the real obvious ones like Psycho, Vertigo, Fight Club and The Shawshank Redemption. These aren’t my ten favorite movies, but I’d watch any one of them again in a heartbeat, and if you haven’t seen them I suggest you immediately add the omissions to your shopping list or Netflix queue.

Angel Heart:  Probably a little more obvious than most (Robert DeNiro’s character’s name) and a little overwhelming with visual pizazz, but the end(ing) justifies the means. One of Mickey Rourke‘s better performances.

A Beautiful Mind:  Having two dynamic actors like Russell Crowe and the great Ed Harris was huge; they could not have sold this premise with pedestrian performances.

Donnie Darko:  So was it a horror flick, a religious allegory, a knock on conservatism, a time travel epic, a fable or a study of hallucinatory madness? Yes.

The Game:  David Fincher is more famous for the brilliant Fight Club but this tense and clever story keeps you wondering what and who you can believe. Michael Douglas, Sean Penn and a large supporting cast do the script justice.

House of Games:  David Mamet, a master of words and misdirection, at his peak. Joe Mantegna and Lindsay Crouse deep in the world of con men and grifters where not everything is what it seems to be.

Memento:  Christopher Nolan directed and wrote the screenplay based on his brother’s short story, and Guy Pearce provides a brazen and brilliant performance alongside Joe Pantoliano. Told backwards, like Nolan’s prior film Following.

Once Upon A Time In America:  Maybe my favorite gangster movie of all time, and considering how perfect a movie Goodfellas is, that’s saying something. Sergio Leone directs a star-studded cast but you have to pay close attention.

Primal Fear:  I’m normally not a Richard Gere fan but he’s great in this one as his arrogance is his downfall. This film launched Edward Norton’s career (an Oscar nod in his first real role) and made me fall in love with Laura Linney.

Session 9:  One of the truly atmospheric horror movies of recent times, far from the gorefests that are passed along as horror movies today. This is creepy and unnerving, and even David Caruso is good in it. Director Brad Anderson now works on Fringe.

The Spanish Prisoner:  Mamet again. Everytime you think you know what’s going on, you really don’t. It’s like watching a magician show you the trick but then repeatedly doing it again. The final scene makes me wonder if Mamet didn’t intend the entire movie as a con, but I change my opinion every viewing.

I love good impressions. Some targets are so classic (Walken, Nicholson, Cagney) that it’s hard to add a new wrinkle to them after all this time.  Other times you nail someone so well, you can’t get away from it, and if something happens to make that impression taboo…well, you’re Vaughn Meader.

Not too many people do impressions any more as a full time endeavor; Jim Carrey was one of the most brilliant impersonators I ever saw but even he walked away from it. You can even see that someone as well-known as Frank Caliendo is getting stale by almost being compelled to constantly do John Madden. Having him play a show and not do Madden is probably like the Rolling Stones trying to get offstage without playing “Satisfaction”.

The days of full time impressionists like Frank Gorshin and Rich Little surviving outside the casino circuit seem to be long gone, so we just have to find people who drop a few in their act.

When someone has the gift, they have the gift. Kevin Spacey rules.

And I know Christopher Walken impressions are a dime a dozen, but Kevin Pollack is the master.

And finally, an old classic: Andrew Dice Clay does Eric Roberts, Sylvester Stallone, John Travolta, Robert DeNiro, and Al Pacino. The gestures are better than the voices for Pacino and DeNiro, but he nails Travolta and Stallone, and that has to be the best Eric Roberts impression I’ve ever seen.

More snarky observations from the weekend, as the Hollywood Elite shook the Santa Monica sand out of their shoes (well, those with any Indie cred, anyway!) and headed to Red Carpet Land for the Big Show… 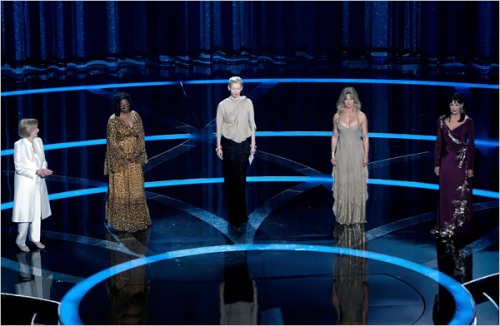