Under The Radar: Mary Weiss

I was thinking about how much I miss The Compulsive Gamblers, which of course made me realize that The Reigning Sound are way overdue for a new album. It also reminded me of the genius of Greg Cartwright and how much fun I had watching him (with The Reigning Sound) open for and then back up Mary Weiss a couple of years ago at the Beachland Ballroom in Cleveland, Ohio. Weiss, of course, scored multiple hits forty (!) years ago as the leader of The Shangri-Las, and while “(Remember) Walking in the Sand” and “Leader of the Pack” were intregal parts of this set (and thoroughly appreciated by the audience, natch!) the new songs were flat-out killer. My favorite, “Stop and Think It Over”, is a classic Compulsive Gamblers tune that many bands cover; The Hives light it up pretty well and Sarah Borges even had a hit of sorts. And speaking of huge Shangri-La fans, this song has David Johansen written all over it – maybe a cover on the upcoming New York Dolls album, please?

But all this daydreaming only made me realize that despite all that magic, most people probably missed the tour and album. So true to the column header, I thought it would be a good time to shine a light on a well-deserved target. 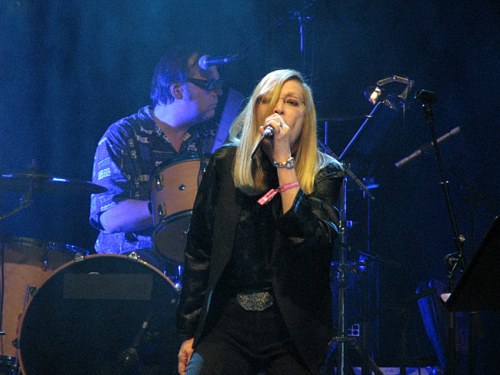 Still the Leader of the Pack.

So many bands have been stitched back together for money-making stints at the local casino that it’s hard to remember what the word “comeback” really means. How about changing the sonic landscape in your teens, then aside from some oldies gigs, all but disappearing from the public eye for almost forty years…then launching a vital, contemporary sounding statement? Former Shangri-La Mary Weiss has done just that, thanks in large part to The Reigning Sound as her band and Greg Cartwright as chief songwriter and co-producer (along with Norton’s Billy Miller). Of course, when you can sink your teeth into Cartwright gems like “Don’t Come Back”, “Stitch In Time” and “Stop and Think It Over”, how can you not sound great? Who else could give Weiss the wiser-than-thou single “Cry About The Radio”, which opens with the immortal couplet “Kids / Kids don’t know shit”?

Miller and Cartwright create a wonderful sonic platform for Weiss, aided by some ace songwriting from John Felice, Barry-Greenwich and The Dictator’s Andy Shernoff. The latter’s “You’re Never Gonna See Me Cry” (a co-write with Miller) defies time, bridging the gap between the heyday of Spector and Shadow Morton (complete with short spoken word bridge) and twenty-first century neo-garage pop. Her old fans will certainly be thrilled by “the voice” along with enough angst and doom in the lyrics (though not as melodramatic). New fans will marvel that a sixty year old looks forty and sounds thirty.

If Mary Weiss spiked the ball with Dangerous Game and walked away, this would be great closure; a glorious and worthy cap on her career. But I hope she’s got a couple more in her.