It appears that FX has done it again.

Lights Out is a 13-episode story about Patrick “Lights Out” Leary, a former heavyweight champ who retired five years before but still has the itch. Not the itch an Evander Holyfield feels, a twitch in a man who doesn’t know when to quit, but a guy who walked away from it all after a controversial split decision stalled his career. His corner, including his trainer father, urged him to back off in the final round and win on points instead of going for the knockout. His med student wife, stitching him up in the dressing room after one too many beatings, tells him to make a choice between the ring and the family.

He followed his family’s advice on both counts, but the decisions haunt him daily. Outwardly he tries to play the happily retired guy, cooking breakfast for his daughters and helping out at the gym, and you can see that he has talked himself into accepting this. But his world starts to crash – finances are not what they seem, his family lives far beyond their means, and by the time he realizes that the slope is slippery, it’s too late. No longer the champ, suffering the slight but initial effects of brain damage, he’s a square peg outside the ring. And the offers he’s getting to generate a little cash are anything but above-board. (Yes, he lives in Bayonne, New Jersey…) 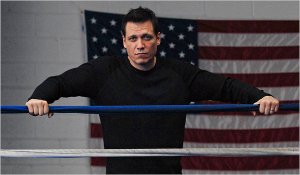 Lights is played by Holt McCallany, whose very name infers toughness. One article compared his performance to the first time you saw James Gandolfini as Tony Soprano or Jon Hamm as Don Draper. A bit early for canonization, but I don’t think even the most ebullient is trying to place this show on a mantle alongside The Sopranos or Mad Men. Rather they are correctly noting that the lead actor has that instant charisma and natural charm; a presence that exudes mystery, power and secrets. Even if he might not literally be a good guy, you are (ahem) in his corner from the first scene. Like the aforementioned famous actors, McCallany has been banging around for a while, but seemingly has stumbled into the role of a lifetime. He is pitch-perfect as the man lost outside his comfort zone; juggling debt, health issues, self-doubt and the undesirable elements that circle that world.

I have rarely seen as many online ads for a new TV show as I have for Lights Out this week; perhaps FX is trying to make up for the disastrous campaign for Terriers. That show – almost universally recognized as excellent – had to build from almost nothing thanks to the symbolic but misleading promos.

I’ve only seen the pilot episode – I’m not the “A-list” guy who gets an advance 5-pack from the network – but it’s clearly way deeper than “a boxing series”. If it stays this good, you can file it alongside Justified, Breaking Bad and Sons of Anarchy as another edgy, daring television show made for adults. Adults who are approached as intelligent viewers who can follow the threads and nuances of the characters and the plot. I hope enough viewers return the favor and step up to the challenge.

Or you can always Live To Dance.