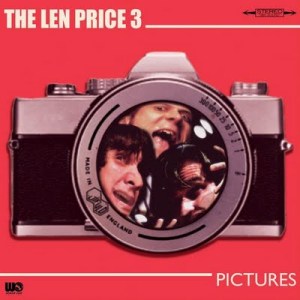 (No TGIF today as we conclude the 2010 countdown…)

When all is said and done, rock’n’roll is supposed to be a release, whether that’s from the pulsating rhythm of the music, the depth of the lyrical message or the sheer enjoyment of playing the damned thing loud. It’s hard enough to compare the apples and oranges of music, but when I was finalizing the list I asked myself… which album brought me the most pleasure? Which did I play the most often? Which did I look forward to playing, even if I had heard it thirty times?

And so I give you Pictures from The Len Price 3.

Recalling the great kinetic music of  The Kinks, The Creation, The Small Faces and the early Who, the trio blends in irresistible pop vocals (think Sire-era Searchers or The Records) and punk energy (The Jam and The Clash being obvious influences). The result is a baker’s dozen of explosive three-minute singles; kudos to the production of Graham Day (The Prisoners, Graham Day and the Gaolers).

The album launches itself with the title track (led by Keith Moon drum fills) and follows that jab with the right cross of the celebretard anthem “Keep Your Eyes On Me“, one of 2010’s absolute classics.

Free Download (while it lasts!): “Keep Your Eyes On Me”

By the time I got to the third track, “I Don’t Believe You” I already knew I was gobsmacked…and then it just got better. Music like this is the epitome of what the Underground Garage is going for, so it’s no wonder that Little Steven signed these guys onto his Wicked Cool label. I really liked their first two albums Rentacrowd and Chinese Burn, but Pictures is a leap forward even from those. I had it pegged as a best-of contender when it came out in January, and sure enough,  it held off all comers to finish as the best album of 2010.

Listen to clips at Amazon

Video: “I Don’t Believe You” 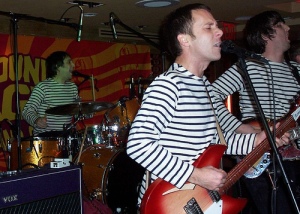 The Prisoners heritage is clear 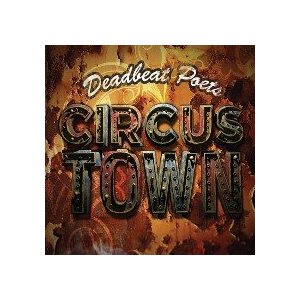 If I hadn’t already been familiar with how good The Deadbeat Poets are, I’m not certain that kicking off an album with a song title like “Elvin Dabney, Professional Thief” would have hooked me. Not that “The Postmodern Razor Wire Showdown” would have drawn me in either. So don’t let that dissuade you, either – Circus Town is another great release on the heels of Notes From The Underground.

I often think of different artists when I listen to their music, but not in a copycat way. Hell, my first exposure to them still knocks my socks off; “The Truth About Flying Saucers” sounds like Warren Zevon fronting The Del Lords after three rounds of Red Bull. (Full version on their MySpace page – link at bottom)

“People These Days” takes The Kinks’ “You Really Got Me” and flips it on its head; “At Least It Worked Out For You” is fiery and rambunctious, like The Wildhearts or vintage Stiff Records acts. “The Staircase Stomp” might recall The Jam or The Motors. There’s a wealth of sharp hooks and snappy choruses – this is meant to be played loud and sung along to.

Of course, with band members having tenures in bands as widespread as Blue Ash and Stiv Bators, one would expect a myriad of influences to creep in. “Sunglass City” sounds like a song The Beatles might have covered during their Cavern Club era, or perhaps an obscure Kinks b-side. Jangly twelve-string guitars add a Byrdsian essence to “I Thought I Knew You”, which (like “Madras Man”) could pass as easily as a late 70’s Searchers cut as it could a contemporary country-pop tune.

It rocks, it swings, and it’s funny, and hitting the replay button is a no-brainer. Sure, it starts out like gangbusters and eases to a slower finish, but so does my car and my metabolism. And if that’s the only nit you have to pick, I have two words for you: shuffle play. 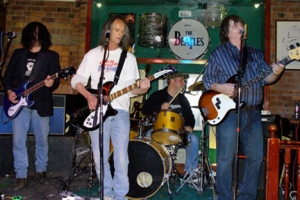 The Deadbeat Poets on MySpace