Emmy (See if I got this straight…) 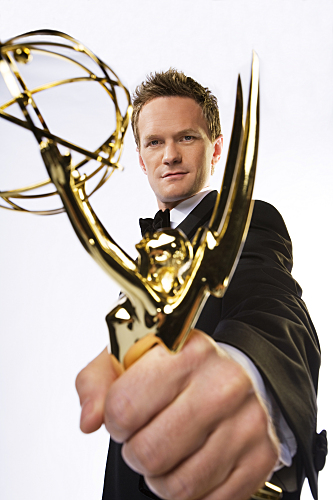 Here’s the list of nominees and winners. I was a miserable 6 of 18 on my predictions, but there were a few upsets. So, attention DVR People – my comments below include spoilers! Now I’ll wait a minute while those people leave the room and seat-fillers take their place…

Let’s hear it for the boy! Doogie was great – killing it with an opening number that was acerbic and funny (and props to him for immediately crediting the writers – Scott Wittman and Mark Shaiman from Hairspray) and keeping things moving pretty briskly. Made some great quips and dished out some kudos where and when appropriate without being fawning. Great running gag (with Jon Cryer, among others) after not winning for Supporting Actor, which several critics apparently took seriously. The retort to Academy President John Schaffner in the audience after the latter gave him an Emmy pin (“Yeah, that helps.”) was hilarious. Only the extended “best seat in the house” gag got tired. But really, how can you possibly dislike the guy? He must have a Q rating off the charts. (And if you thought that bit where he breathlessly rattled off the list of networks was great, watch this !)

And speaking of the Harlem Globetrotters – the only time that tired gag was really funny – it was good to see the Washington Generals of the Apple ads get his night. While Justin Long had to sit complacently next to Drew Barrymore, his partner in those hilarious commercials, John Hodgman,  got to zing one-liners from the booth. Between serious voice-overs (“This is her first win and her second nomination“) he peppered the audio with absurdly funny comments (“The Daily Show With Jon Stewart is celebrating its 76th year on the air. It began on Comedy Central Radio as Stewart-Brand Chicken-Fat All-Star Baked Beans Half Hour. This is their 900th Emmy, and frankly, that’s too much“). Likewise, Harris often introduced nominees by “obscure” credits from their resumes.

The tables have turned.

Splitting the show into segments. Very good idea, albeit risky. Of course, they always have to start out strong to keep the audience from flipping, so Comedy was the appropriate leadoff hitter. Exhausting that category so soon risked weakening the overall show but they pulled it off. Better yet, getting to fast-forward through the Reality segment kept the projectiles off my screen and the vomit off my floor. After last year’s program, where TV almost killed its own Golden Goose by kissing the ass of the most unreal programming on television, can you blame me for avoiding that train wreck of a category? (And please explain how American Idol was included within the “Reality” part of the program, but then the director won in the “Variety” category?)

Three cheers also for the set. The theatre is amazing, and the versatile set was configured to expose the composition of the evening like peeling the skin off the skeleton. The band out of the pit, the production booth in view upstage, the host actually able to host from a designated location. Aside from one obvious technical glitch – which Ricky Gervais turned into gold, of course – the show ran very smoothly.

The mood of the show was also interesting. Fairly egoless – our host was a big part of that. Almost everyone got through their lines and cues without issue, and for the most part the presenters and recipients avoided the usual politicking (Washington and Hollywood) that the Oscars seem to bring in droves. There weren’t enough performance clips for my taste – sometimes none at all – and the gimmick about asking some of the non-performer nominees mostly fell flat because some took it seriously while others didn’t (the clip of the night was from Conan O’Brien’s show, where he predicts “YouTube, Twitter and Facebook will merge to form one super time-wasting Web site called YouTwitFace.”)

And thanks to the network for not picking up that ridiculous gimmick that Fox dropped on us recently where the lower third of the screen is filled with scrolling tweets. Die in Hell for that one, television. Isn’t it enough that you pander to wannabe celebretards by cramming as many of these unreal crapfests onto the air in place of creative and scripted programs? Now you have to let couch potatoes try to tweet their way onto the screen so they can – I dunno – tweet their friends that their tweet was broadcast? (That’s like a snake eating its tail, right?) Then you’ll complain that no one could follow the plot of your show.

Best surprise – an appearance by Dr. Horrible, which was perhaps not as funny for people who have not seen the hilarious webisodes starring Harris, Nathan Fillion and Felicia Day.  Of course, the irony that the program was created on the Internet during the writer’s strike and aired without any network or commercial involvement was probably also too subtle as well. But why fret about those who can’t appreciate it, knowing the zeitgeist of 2009 somehow justifies Leighton Meester and Brooke Lively walking on the same stage as Glenn Close and Bob Newhart? (And folks,  Nathan Fillion rules.)

I always get a little verklempt during the In Memoriam segment anyway, but really – bringing Sarah McLachlan out to drive a nail through my heart? Was that necessary? If you’ve been to a memorial service in the past decade you know that song is as requisite as Donna Summer’s “Last Dance” at a wedding reception…and I experienced both within twenty-four hours this weekend. (She did nail the performance, though).  Maybe a good career move for her, since the last few times I’ve seen her on television she’s been asking me to save abused pets. But between those ads and that song, she’s unquestionably the reigning Debbie Downer.

Kristin Chenoweth squeaked and squirted so much during her crying jag that the high-pitched whine probably killed one of Mickey Rourke’s dogs. I was surprised by her win, but she is talented (Wicked on Broadway? Girl, please!) and now can hopefully afford to buy a sandwich. She was the first person that said “this is really heavy” when holding the Emmy Award that I believed. Really – the girl makes Olive Oyl look fat. Great bit pimping for jobs on Mad Men and 24 now that her show is cancelled.

Ricky Gervais. Pure freakin’ gold. I don’t know if he could keep up that pace for the entire program, but I’d sure like to watch him try. As solid as Neil Patrick Harris was – and he was very good – Gervais has the fastest mind I’ve seen since Robin Williams in his prime. Combine that with a self-deprecating attitude and a bold disregard for convention (I’m willing to go there, and don’t care what you think about it) and you get both humor and unpredictability. He is, as the Brits say, brilliant.

Comedy WTF Award: Toni Collette. Really? Really?? I’ll bet more people lost betting on Tina Fey than the ones betting on these guys or them or (sniff!) them. I remember hearing about The United States of Tara being scheduled but that’s the last time I heard it mentioned. Tina Fey might be getting so many accolades that there’s a backlash, but she was funnier than ever this year. But she nailed the guest appearance as Sarah Palin and won that Emmy as expected, plus having 30 Rock win was probably more satisfying, since it works because it’s an ensemble piece. (Well, more satisfying to me, anyway.)

Perhaps it was because they front loaded the comedy, but after all those overt verbose kudos to Lorne Michaels,I figured he either was quietly diagnosed with inoperable cancer or owns a scrapbook with incriminating photos of everyone he’s ever worked with. (Probably it’s just that he’s a nice guy).

There were some repeat winners I can’t argue with – Jon Stewart, Alec Baldwin – they deserve the accolades. Happy to see Michael J. Fox snag a Guest Actor win for Rescue Me; it reminded me of some shows and people who got overlooked entirely.

Drama kudos: Bryan Cranston. I figured that Jon Hamm would walk off with it as Mad Men gets a lot of Emmy love, but Cranston is unbelievable in his role and well deserving. Can’t knock the win by Michael Emerson, either – here’s a guy who was so good that a guest spot on Lost was transformed into the central character on the show. But I wish the voters showed the love to Aaron Paul, Cranston’s co-lead on Breaking Bad, who had a (ahem) breakout year.

And speaking of breakouts…WTF was up with that “breakout moment of the year” polling? Those were the three most transcendent moments on television this year? Really? Did they limit the voting to people under the age of twelve? Not only was the gimmick itself distracting and juvenile, but the impact was…well, what’s the opposite of buzzworthy?

Some good presenter moments, too. Jimmy Fallon’s dance injury bit was great. Justin Timberlake after Sarah Silverman’s moustache shot (“That’s what hormones will do“). Ken Howard (The White Shadow!!) hoping his speech “doesn’t get interrupted by a Congressman or a rapper”, then cracking an opportune SAG joke. Amy Poehler and Julia Louis-Dreyfus smilingly confirming the end of broadcast television as a vital medium. Jessica Lange -a cougar even at 60-  saying parts (ahem)  “don’t come around that often for me anymore“. The always randy Dana Delaney  topping that with “I like a man who delivers week after week!” Bryan Cranston saying he’s thankful that Glenn Close is actually a woman. Tina Fey taking a well-deserved shot at NBC by thanking them for keeping 30 Rock on the air “even though its much more expensive than a talk show“.

Who would have thought that after their Super Bowl duet, Justin Timberlake would be so much more popular than Janet Jackson’s breast? I’m still not a fan of his music, but the guy is funny as hell and despite incredible fame seems to be pretty humble about it. If only more famous people took themselves less seriously.

Oh, wait. Then we wouldn’t have Award Shows. Never mind.