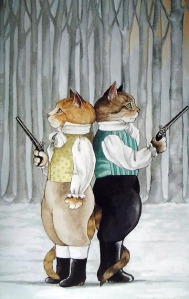 That’s thumbs both up and down, as it looks like the voting academy finally started to recognize that basic cable programs are pretty much kicking TV’s ass right now. Yes, Mad Men had gotten tons of accolades (and deservedly so), but TNT, FX and USA have been pumping out quality programming with interesting characters and solid casts without getting their due. I’m still burning over the fact that The Shield got their attention in the first season but then fell off their radar after that despite six seasons that raised the bar every year. But we shouldn’t cry over spilt blood.

This year’s list of nominees did provide some surprising nods that put a big smile on my face. But as always, there were some jaw-dropping announcements that just made me shake my head. So for this week’s TGIF, how about Ten Emmy Thumbs – five up and five down?

(01) – Justified: Walton Goggins got screwed over so many times on The Shield that I lost count, and I was afraid that his dynamic performance on Justified was going to be overlooked as well. But thankfully voters woke up and nominated him along with series lead Timothy Olyphant and the amazing Margo Martindale (who might have given the single best performance on television this year).

(02) – Louis CK: Not only did he grab nods for his show and his acting, but his comedy special picked up two nods as well. Denis Leary had to watch The Job get ignored before hitting it big with Rescue Me; let’s hope Lucky Louie opened the door for a long ride with Louie.

(04) – Robot Chicken: Some of the absolutely gut-bustingly funniest shows on TV are buried in the Adult Swim section of the Cartoon Network. Seth Green continues to amaze.

(05) – Parks And Recreation: The pendulum on Thursday’s NBC comedy block has clearly swung to the newer half of the evening, with Community and P&R really stepping up their game. Amy Poehler is great but Nick Offerman should have been a no-brainer nominee.

(06) – Um…where are the nominations for The Closer, Castle, The Walking Dead, Treme, Fringe and just about anything sci-fi related?

(07) – Modern Family – great show with a great cast. But did every single adult cast member deserve a nod? You couldn’t slide in anyone from Community or Parks and Recreation? Have you not seen Children’s Hospital?

(08) – Category Blunders! Since when is SNL a comedy series and not a variety show? Kristin Wiig gets a supporting comedy actress nod? Hosts of the show are guest actors? How about people like Mary McConnell and Cloris Leachman, who are cast members in the shows they were nominated for as guests?

(09) – The Good Wife – like Modern Family, a good show, but let’s get real. Christine Baranski and Josh Charles are good actors, but…the best? There are at least ten people on Sons of Anarchy alone that blew them out of the water, and that show was completely overlooked again this year

The Praise Is Fully Justified

Like I expected anything less from an episode called “Bloody Harlan“? I won’t spoil it for you, don’t worry – sit and savor it for yourself. Matter of fact, go back to the first episode of this second season and watch it all again just in case the well-placed seeds escaped your grasp the first time around. Because what’s popping up out of the ground as this arc closes is as interesting as who is getting planted in it.

I think we all agree that Timothy Olyphant is badass, and in Raylan Givens he has achieved what many actors never do – the perfect match of performer and character that we can only feebly call the role of a lifetime. But even I wasn’t sure where they could take Justified after the first season; frankly I was thrilled just to see that it was renewed. But I’m struggling for the words to describe how exponentially better this season has been. Whatever the opposite of a sophomore slump is called would be a good start.

I couldn’t even tell you where to start with the supporting cast, from the amazing Walton Goggins as the unpredictable Boyd Crowder, Nick Searcy as the supportive yet skeptical boss, or Natalie Zea and Joelle Carter as the strong but damaged women trying to keep Givens and Crowder from jumping the rails. And in smaller and guest roles, actors like Raymond J. Barry, William Ragsdale and Jere Burns shine like beacons. But everything in Season Two begins and ends with the Bennetts, a dry-land hillbilly crew that would make the river-edge pikers in Deliverance squeal like a pig.

Joseph Lyle Taylor, Jeremy Davies and Brad William Henke are incredible as this show’s version of Dumb and Dumber (and Dumbest) although there’s rancid evil and twisted Mommy issues percolating underneath those hillbilly hats. Davies has always played characters as an amalgamation of tics and quirks (Lost and Saving Private Ryan being two prime examples), but Dickie is soaked in them. And while young Kaitlyn Dever might seem to be playing a page from the script of Winter’s Bone, she stands toe-to-toe with this group, a tribute to her skills and the quality of the writing. Really – how can you go wrong with Elmore Leonard in the mix? 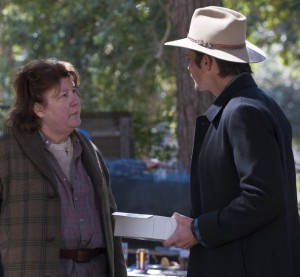 But as Mags Bennett, the matriarch of this twisted little holler, Margo Martindale is off the charts. Sinister yet sensitive, moral and amoral, protective and ruthless, her complex portrayal is mesmerizing. I don’t hold my breath expecting actors on FX shows to get their due when awards are passed out – Goggins would have a mantle full by now if they did – but anything short of a Best Actress trophy would be…well, unjustified.

There are a lot of great dramas on television that deserve your attention like Breaking Bad and Mad Men. But after a season that was absolutely Shakespearian, there is no doubt that Justified is the best show on television, game, set and match.