Retiring after thirty years at the age of 66, Carson walked away from a show that became part of the fabric of American pop culture. Much like Ed Sullivan’s variety show, unknown performers could become instant superstars just by nailing a single appearance. Carson didn’t start the Tonight Show (Steve Allen and Jack Paar preceded him), nor would he finish it, but his impact upon it and the late-night talk show design will forever be paramount.

Other talk shows of the day were warm and fuzzy (Merv Griffin, Mike Douglas) or a bit cerebral (Dick Cavett); Carson blended both with a parade of incredible guests and a willingness to be as serious or silly as the situation required. He let people be themselves. During his reign, the show’s title became secondary to the man; artists simply referred to “being on Carson“.

On his final night, Carson went out with grace and class:

“And so it has come to this: I, uh… am one of the lucky people in the world; I found something I always wanted to do and I have enjoyed every single minute of it. I want to thank the gentlemen who’ve shared this stage with me for thirty years. Mr. Ed McMahon, Mr. Doc Severinsen, and you people watching. I can only tell you that it has been an honor and a privilege to come into your homes all these years and entertain you. And I hope when I find something that I want to do and I think you would like and come back that you’ll be as gracious in inviting me into your home as you have been. I bid you a very heartfelt good night.”

Video: Excerpts from the final show

Although he never came back into the public eye, his legacy lives on through everyone who speaks into a microphone from behind a desk, and the advent of cable television has allowed many students to co-exist in the form. While initially his replacement Jay Leno and his protegé David Letterman split the bulk of the audience, a flood of worthy children now occupy the night-time hours and will be worthy successors to their aging mentors.

Jon Stewart, Stephen Colbert and Bill Maher have taken the political end of the spectrum to new heights; Stewart is often singled out as the most trusted source of news on television, despite his consistent disclaimer that his is a comedy show. (Speaks volumes about the networks, doesn’t it?).

After holding slots previously occupied by both Leno and Letterman, Conan O’Brien’s new TBS effort proved that people will follow the man, not the show. The embarrassing NBC debacle was followed by the guerilla Team Coco movement, and Conan remains a strong brand and a unique personality.

But to a person, each will point a finger back at the master, Johnny Carson.

I finally got to see the new Joan Rivers documentary, A Piece Of Work. While not a perfectly objective film – key people involved are her friends and she had suggestive input to the content – it paints what I believe to be a fairly honest picture of a driven artist who won’t take her hand off the throttle. Part of that drive is to maintain control and keep the cash flow coming in. Part of it is the fear that not doing so would make her irrelevant…but then she’s been fighting that battle since the beginning.

Since I’ve always known her as a comic first and foremost, I’m not certain just how many people perceive her more as the QVC hustler, the red carpet maniac or the poster child for plastic surgery. None of those are complimentary, but if  we learn anything from A Piece of Work it is that Joan will do just about anything for a paycheck. Of course, she sees it for what it is – a paycheck – and in fact the film opens with a shockingly vulgar routine about her daughter passing up just such an opportunity.

Through a combination of photos, clips and footage we get a high level overview of her career – the struggle to get started, the star-making opportunity with Johnny Carson (and the backlash when she launched her own show at Fox); her difficulties with and love for her family and how those ties both helped and hurt her chances. This isn’t a life arc, it was filmed as a year in the life, with anecdotes. While it’s done well, I was hoping for more focus on the backstory; certainly there are hundreds of people who could have provided recollections and insight. We do get a few talking heads, from Don Rickles and Kathy Griffin to staff and management people. Why so few?

You’ll probably learn more about Joan Rivers by reading her books, but that’s her window. The documentarians neither canonize nor attack her, which allow you to see her insecurities as exactly what they are – fuel for the fire. Comedians have to deal with rejection every time they walk on stage. Rivers has dealt with so much throughout her life that it’s amazing she’s still in there punching. But then you see her take the stage, and it’s as if an appliance was suddenly plugged into a socket. She’s fearless and tireless, but most importantly, she’s funny.

Rivers is 77 years old, but her schedule would exhaust a soccer mom half her age. Her recent victory on Donald Trump’s boardroom reality show gave her some extensive network visibility, and a recent announcement has her starting a reality show with her daughter and grandson. This movie was nominated for Best Documentary by the Broadcast Critics and if the Academy follows suit with an Oscar nod, that’s another a couple of months of top rung publicity. There are some painful moments in the film dealing with loneliness and rejection (both personally and professionally); it would be nice to see her get the recognition she deserves and have her name once again be primarily associated with comedy.

Go see the film – but also go see the legend herself.

I guess George Lopez is taking to everybody these days.

“If you haven’t heard by now, Conan O’Brien will be joining us on late-night on TBS. Welcome!, Welcome! I want to say this, I want to say that I am completely 100% on board with this move. I talked to Conan on Wednesday and I talked to him last night and I said I welcome you into my deep loving embrace. Then I said let’s take the party and make it bigger and take it into the next generation of late-night TV. Lets do that! Lets do that! Lets do that! Everybody’s heard of ‘I’m with CoCo’ but now everybody can ‘Go LoCo’.”

Lopez also made a great crack about how doing his show an hour later wouldn’t be the same – basically a nod and a wink to Conan’s response to NBC. Of course, he’s able to laugh because he knows that he just scored a major lead-in for his show.

Yeah, I was shocked at the TBS signing; I figured FOX was in the driver’s seat all the way. And I wasn’t the only one with dropped jaw. But it makes sense for a network that refers to itself as “very funny”. They need to be very funny. And Conan fills the bill. 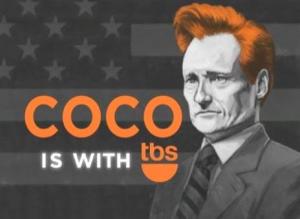 Face it, the Tonight Show is a brand name, but the legacy is irrevocably tarnished. People refer to the choice as Leno or Letterman, not Late Night vs. The Tonight Show. And Leno’s viewing audience is old…and getting older. Lopez, on the other hand, skews young. So does Conan. Tonight might have the name, but lately Jimmy Fallon is hipper, and NBC knows it. Enjoy that deal with the devil.

This year TBS even tried a comedy show – underpromoted, of course – called Very Funny. Imagine how much talent they will attract when the comedians know they will be cross-promoted on Conan’s show…where they will also appear. Imagine the new wave of comedians that will get airtime knowing that they are on basic cable, not network television.

And frankly, aside from the depth of penetration, what is network television? Very few cities still receive over-air broadcast; it’s almost all digital. Most people get something beyond basic cable, and many of those basic cable packages include TBS. And thanks to Al Gore, we have this medium you’re using right now. In other words, a platform is a platform in the twenty-first century. If you want to see something, you can.

All Conan did over the past year was (1) legitimize his ability on the grander stage, (2) exit a horrible situation with class, good will and a shitload of money, and (3) raise his profile ten times higher than a great run on NBC would have done. Win, win and win.

I cannot wait! Until then, catch the mad redhead on the road. 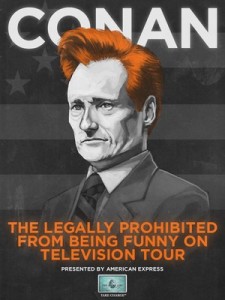 I just can’t get past it.

I was fine with NBC just being jackasses to begin with, and then making the stupidest move in recent television history, and then after Conan’s classy exit I was ready to let it all go.

But no, NBC had to start airing those smarmy commercials using lyrics from “Get Back” to insinuate that the universe has course-corrected itself. As if they fixed a mistake rather than creating two. And now that the Olympics are over, there’s no more Conan and we’ve reset the clock to…I dunno, melba toast?

I bear no personal animosity towards Jay Leno. I saw him years ago doing standup; he was both funny and congenial. I don’t pretend to know what’s really going on behind the scenes. But I do know when I’ve had enough.

So here’s a question for you, NBC network geniuses: If you really have to launch a mass-market campaign to make certain viewers know that Jay Leno is back on the Tonight Show – after every magazine, newspaper, web site and blog beat this horse to glue for a solid month – is it possible that maybe it wasn’t the right move after all?

Not to mention that this seven minutes of  Ricky Gervais’ on The Daily Show with Jon Stewart was probably funnier than anything the Tonight Show will show all year.

So maybe you do need my free plug after all.

One Last Word on the Subject 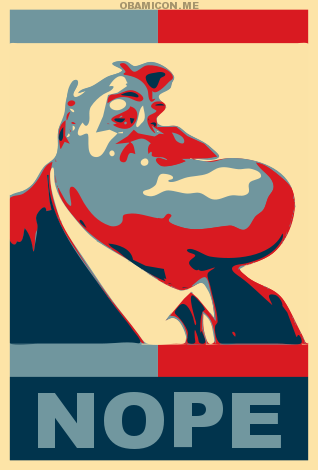