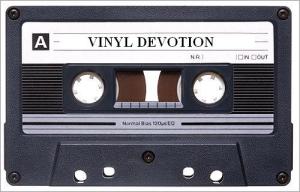 I put this mixtape together many many years ago for a tape tree on the Audities mailing list. I look at mixtapes as something to be taken in one sitting, ideally something slapped in for a car trip where the flow of the music is the center of attention, like I’ve got one shot to program an hour on the radio to win you over. So I started going through my vinyl alphabetically; just vinyl albums – no singles, CDs, or cassettes.

As the people I was trading with have pretty deep roots, I avoided the obvious (ie Beatles, Big Star, Cheap Trick, etc) and went for other songs that stir my stewpot. By the time I got through the “D”s, I easily had twice as much as I needed, and that wasn’t even taking into account the 3-400 albums that were in the “to be filed” pile.

But I came up with a beauty filled with great bands and great songs. I’ve included the original track-by-track annotations that I used for Vinyl Devotion’s liner notes, and since this was in the mid 90s, some of the references will be out of date. But the music is timeless – not a tune that doesn’t stand up today.  Mixtapes were a labor of love; even the needle dropping at the start of side A was intentional.

01 THE BOYS – “First Time Out”
Since you need something to get you out of the driveway, why not something young, loud and snotty? This was quintessential New Wave pop punk. Billy Joe of Green Day probably has a Boys lunchbox. (LINK TO A LIVE VERSION)

02 THE ATLANTICS – “One Last Night”
If INXS were cool and they grew up on 50’s and 60’s American radio, they’d sound like this. But they weren’t, andthey didn’t, and they don’t. Singer’s a bit of a crooner, but it’s a cool song nevertheless.

03 DANCING HOODS – “She May Call You Up Tonight”
Yep, the Left Banke song. I think this version is better. I loved this band but Relativity sank like a stone and these guys with them. The singer, Bob Bortnick, is now in A&R and Mark Linkous is in Sparklehorse. Too bad.

04 THE dBs – “Working For Somebody Else”
So why does everyone hate THE SOUND OF MUSIC? I think the Holsapple era is great. This is almost Chilton-ish rock – the harmonica solo, ringing phone, and the great way Peter pronounces the word “car-REEEP”.

05 THE BEAT FARMERS – “Ridin”
God Bless the late Country Dick Montana,who was Keith Richards in chaps. The BEAT FARMERS were the best bar band ever and always kicked your ass from wall to wall. This Joey Harris tune is a nice taste. R.I.P. fellas! (LINK TO A LIVE VERSION)

06 THE ACCELERATORS – “Two Girls In Love”
Another great band no one knows, what is it about that water in North Carolina? This band rules, but they only put out a record every five years; tho I heard they just re-formed. I love the drum sound on this song.

07 BEAT RODEO – “Just Friends”
Slowing it down, this Don Dixon/Mitch Easter production is anything but twee. Despite the cow name it’s just pure pop after all. Saw these guys live and they were absolutely wonderful. I miss songs like this.

08 DON DIXON – “Your Sister Told Me”
I’m convinced that if Motown were in North Carolina, Dixon would be Holland, Dozier and Holland. One of the many on my “how can this guy/band not be friggin’ HUGE?” list. And my hat tip to The Woods, his roots. (LINK TO A STUDIO VERSION)

09 BILLY BREMNER – “When These Shoes Were New”
The true M.V.P. of Rockpile. From the lp BASH which only his parents and I bought. Will Birch co-wrote and produced most of the songs, and it’s wall-to-wall great. I want to play piano like the guy on this track.

10 ANY TROUBLE – “The Trouble With Love”
Clive Gregson just didn’t fit in that New Wave movement, but his band put out five killer records with great songs like this. You may know his records and gigs with Christine Collister and their gigs with Richard Thompson

11 THE A’s – “Heart Of America”
From Philly, natch – is this one of the ten best rock and roll songs ever made? Mott The Hoople meets Elvis Costello and drop the gloves. Killer guitars, horn section, and the one of the most unusual solos in rock history.

12 THE CRETONES – “Real Love”
When Linda Ronstadt “went punk” that year she butchered “Alison” and two of this band’s songs; “Mad Love” is the other. This is pretty mainstream, but fun when you realize there isn’t a female voice on the record.

13 THE DUROCS – “Saving It All Up For Larry”
Try this: Brian Wilson goes sandbox, but instead of Stamos and Johnston the Beach Boys sign up Flo, Eddie, Zappa and Todd. Actually it’s Nagle and Matthews, right around the time they produced John Hiatt. Great, great record! (LINK TO VIDEO VERSION)

01 JOHN CALE – “Guts”
From the album that even Cale-haters like. Uses the words “parrot shit” and “hyperbole” in the same verse. Top that, Lou Reed! This record is known for a suicide-inducing drone version of “Heartbreak Hotel”

02 THE CRUZADOS – “Motorcycle Girl”
Tito and the boys cooking up East L.A. spunk in the days before they hooked up for gigs as Bob Dylan’s band. Bassist Tony Marsico is now with Matthew Sweet.

04 THE DRONGOS – “Overnight Bag”
Life before Crowded House in New Zealand. What a great guitar player! I wouldn’t try to make love to this song; it’s better suited for popping popcorn! Went to see them one night only to find out they broke up that afternoon.

05 THE DIRTY ANGELS – “Call My Name”
Remember in 1979/80 when everybody got signed and dressed in pastels on album covers? Well, DA had nude mannequins with missing appendages. Ah, so what. But I know the name David Hull from elsewhere.

06 THE DICTATORS – “Heartache”
Scott “Top Ten” Kempner and Andy Shernoff both could write big hooks, but the underwater production buried them. Too bad. When you got past Ross The Boss’ guitar god act, these guys had some great songs!

07 CITY BOY – “I’ve Been Spun”
Jellyfish, eat your heart out. These guys could really rock, too, but were known for the unbelievable vocal harmonies. The guitar player, Mike Slamer, makes me grab the air guitar frequently over six records.

08 BLUEBELLS – “Everybody’s Somebody’s Fool”
No, not the Dean Martin song. You may remember “Cath” or “Syracuse University”, but I always liked this the best. One of those “why isn’t this on CD” records, but frankly most people can’t even find the vinyl!

09 THE DAVE CLARK FIVE – “Because”
Because after 33 years it’s still great. Because Gary Frenay and Artie Lenin played it at my wedding and people were breaking out in tears. Because it’s my tape. Because.

10 ARTFUL DODGER – “She’s Just My Baby”
Even Artful Dodger fans gave up by this record. While earlier records were like a poppier Rod Stewart; I hear a perfect blend of Dwight Twilley and The Records. Why was this band not a major, major hit? (LINK TO THE PROMO VIDEO)

11 MARSHALL CRENSHAW – “Rave On”
Live cut done at the drop of a hat in a Chicago station. Unbelievable how great he and the guitar sound just by themselves! So far he’s played Lennon in Beatlemania, Holly on film, and made one of the best debut records ever.

12 GARY CHARLSON BAND – “Hey Deanie” & “Go Back”
Another live in the studio gig from an incredible pop guy, these are two of my faves. Bought this based on Bruce Brodeen‘s adjectives (it’s an OLD record). So where is he now? And who the hell was this incredible drummer? (LINK TO A GARY CHARLSON MEDLEY)

13 SHAUN CASSIDY – “So Sad About Us”
Yeah, go ahead and snicker. The backup band is Todd and Utopia, and the whole album could have been called Faithful – Part Two! Messed up Shaun so badly he didn’t resurface for years, and then showed up with “American Gothic”! 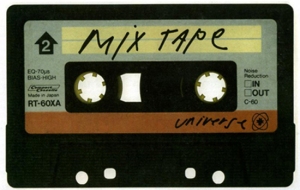 Blast From The Past: City Boy 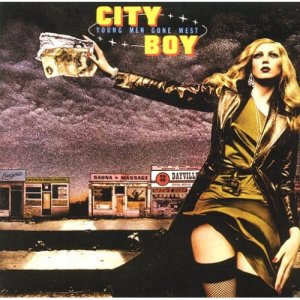 Talk about your unknown classics? Try this one!

City Boy is on that list of bands that woulda/shoulda/coulda been way bigger than they were, but for some reason only touched the high bar for a brief period of time. They combined impeccable vocals and vocal harmony with inventive arrangements and first-rate musicianship, and reaped the benefit of having multiple songwriters in the band. Their one bonafide hit single, “5.7.0.5.”, was from their fourth album Book Early, and while it was stuffed with great tunes it didn’t hold favor over time. Their next two albums sailed under the wavelength of everyone except their fans and remain underrated albums to this day.

Young Men Gone West, their third release, was probably the album that floated closest to a commercial pop sound; I’m still stunned that there weren’t multiple hits jumping off the record. It’s a loosely threaded concept album about a bad journey baja way, written with an enormous sense of humor.

City Boy was unusual for the time in that Steve Broughton and Lol Mason both sang lead vocals, although Broughton also played guitar. It wasn’t odd to see them trading lead and background vocals simply as dual front men, and the arrangements dabbled in jazz, soul and even prog as well as pop and rock. The high falsetto harmonies and intricate vocal parts brought them comparisons to Queen, Supertramp and 10cc, recent post-mortem comments cite Jellyfish and Def Leppard, among others. Compliments all. Multi-instrumentalist Max Thomas also pitched in with songwriting and vocals and producer Mutt Lange worked his magic. City Boy indeed forged these elements into something of their own.

“She’s Got Style” and “I’ve Been Spun” (the latter contains several brilliant turns of phrase) are short sharp pop songs, while the rockers among us cue up “Dear Jean” and “Bad For Business” ; both boast monster guitar work from Mike Slamer. (The former makes me pull out the air guitar to this day.) The rest blend a parade of sounds so that song-to-song it sounds fresh, various tempos and styles evenly distributed in perfect array.

After four albums on Mercury they moved to Atlantic for two more, then finally to Vertigo for the last one, It’s Personal. By then the band was a quartet and most fans (read: me) were unaware it existed until it was too late. And another great one bit the dust. The first six albums are commercially available, reissued by Reniassance Records; the seventh only if you hunt and peck on Al Gore’s Internet if you know what I mean and I think you do.

“Young Men Gone West” is available alone or as part of a 2-fer with Book Early, although the 2-fer is out of print and expensive on the used market. But if you don’t know the band, don’t stop here ! You will be richly rewarded by checking out their vastly underrated catalogue.

And no, don’t confuse them with this guy.

What can I say?

All of these put a huge smile on my face and a spring in my step. Kick off your weekend with some great tunes… 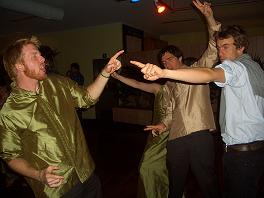